In EIA’s January Short-Term Energy Outlook (STEO), they forecast that OPEC petroleum production will increase by nearly 2.7 million bpd in 2022, the largest year-over-year increase in OPEC production since 2004. 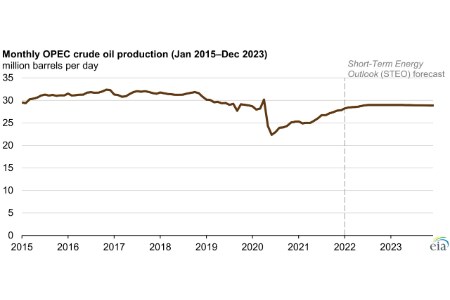 This increase in the EIA’s forecast of crude oil production is largely based on their interpretation of the January 2022 OPEC+ meeting, when participants reaffirmed their decision to continue to increase output by 0.4 million bpd each month until all of the production cuts are reversed. The EIA expect that recent production disruptions in Libya will be more than offset by production increases from other OPEC members.

Libya’s crude oil production averaged nearly 1.2 million bpd during 2021. In late December 2021, armed militants shut in an estimated 370 000 bpd from the four key oil fields in the southwestern part of the country. The EIA estimate that 0.4 million bpd of crude oil production went offline in Libya in late December 2021. This unplanned outage contributed to the increase in the Brent crude oil spot price to US$90 per bbl, as of 19 January 2022, which was US$16 per bbl more than the December average. This January daily high was the first time the Brent crude oil price had reached US$90 per bbl since October 2014. Heightened political risk following the delay in Libya’s presidential and parliamentary elections (which were scheduled for 24 December 2021) continues to create uncertainty. In addition, ongoing maintenance on the country’s aging infrastructure also continues to limit oil production in Libya.

As a result of this disruption in Libya, the EIA estimate that unplanned outages in OPEC countries increased to 2.2 million bpd in December 2021. The forecast assumes that the sanctions that are constraining petroleum exports from Iran and Venezuela will remain in place through the end of 2023.

Read the article online at: https://www.worldpipelines.com/project-news/31012022/eia-forecasts-opec-production-will-grow-in-2022-despite-recent-production-outages-in-libya/