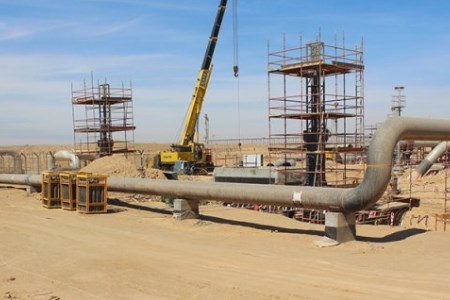 To ensure production was maintained throughout the construction activities STATS created a temporary 30” bypass line around the 42” tie-in locations via two additional hot taps to ensure there was no shutdown or interruption to the gas flow. STATS BISEPs provided fully monitored, leak-tight double block and bleed isolations at 30 bar for over seven months. This isolation guaranteed welder and worksite safety during the construction.

The project began by excavating the 42” pipeline at the isolation location to allow four split-tee fittings to be welded onto the pipeline, two fittings – one at either side of the tie-in location. The two inner isolation fittings incorporated a 42” off-take to provide full bore access to deploy the BISEP isolation plugs, the two outer bypass fittings incorporated a 30” offtake which would maintain the supply of gas while the workscope was completed.

Once all four fittings had been welded to the pipeline and tested, STATS dual seal slab valves were attached to each of the fittings with the hot tap operations performed with a STATS ST1220 SureTap® Hot Tap Machine. The SureTap range of proprietary hot tapping machines provide performance and reliability for critical, high pressure hot tapping operations. Designed and built to incorporate industry leading features, the SureTap range incorporates a double block and bleed sealing configuration allowing taps to be performed safely on a wide range of pipeline materials and mediums, including use with sour (H2S) products. A leak-test of the fitting, slab valve and hot tap machine was performed prior to conducting the hot tapping operation. The two 30” hot taps were completed with the pipe coupons recovered. With the slab valves providing isolation the Hot Tap Machine was disconnected and reconfigured to carryout the 42” hot tapping operations with recovery of the pipe coupons. With the hot tapping completed the 30” bypass pipework was installed and tested ready for the BISEP launchers to be fitted to the 42” slab valves.

With the bypass valves open STATS patented BISEPs were deployed into the flowing pipeline and hydraulically activated to provide fail-safe double block and bleed isolation with flow diverted via the bypass. The BISEP offers significant safety advantages over traditional line stop technology, the hydraulically activated dual seals provide fully proven and monitored isolation of the pipeline inventory throughout the entire project. Due to the leak-tight seals the isolation does not require any additional equalisation or bleed valves to be installed on the pipeline.

Each BISEP was then subject to a test regime to independently test both the primary and secondary seals with full pipeline pressure, the cavity between the seals (annulus) was vented to ambient and verified as a zero-energy zone, providing double block and bleed isolation. Once the test regime was complete, an Isolation Certificate was issued to notify all parties of the safe isolation of the pipe section. Utilising the integrated offtakes on the BISEP launcher, nitrogen was injected into the isolated pipeline between the set BISEPs to purge and depressurise the pipeline prior to cutting and removing the required section. The BISEPs then remained in the pipeline for over seven months while construction activities including welding were conducted behind the BISEPs without the use of traditional secondary barriers (gas bags) to tie-in the newly laid pipelines. During this time the seal annulus on both BISEPs were monitored and remained leak-tight. Gas production was maintained through the temporary bypass line ensuring no shutdown or interruption to gas supply. On completion of a successful reinstatement test of the pipelines the BISEPs were hydraulically unset and retracted back into the launchers. All four slab valves were then closed to shut the bypass line allowing the gas to flow through the new pipelines. With all four slab valves closed the BISEPs were removed and STATS ST1220 SureTap Machine was used to deploy completion plugs into the fitting offtake flanges. The pipe coupons that were cut from the pipeline during hot tapping were dressed and welded onto the completion plugs to act as pigging guides thereby ensuring the pipeline remained piggable. Once the completion plugs had been deployed and activated in the offtake flanges, the slab valves were removed from the pipeline and blind flanges bolted in place.

Angus Bowie, Regional Director MENA for STATS Group, said: “This successful hot tapping and plugging project marks a significant milestone for STATS as it’s the first isolation completed in Kuwait and at the time was the largest BISEPs produced and deployed. However, this has since been beaten by the deployment of a 54” BISEP at a refinery in Abu Dhabi, UAE”.

Read the article online at: https://www.worldpipelines.com/project-news/30112018/stats-group-provides-hot-tapping-and-plugging-services-on-a-42-gas-pipeline-in-kuwait/