Gas output from the Permian Basin is expected to rebound relatively quickly in the second half of 2020 and will remain robust for years to come, according to Rystad Energy projects. However, the low-investment environment created by COVID-19 will likely postpone approvals for important key pipelines which may necessitate increased flaring from 2023 onwards. 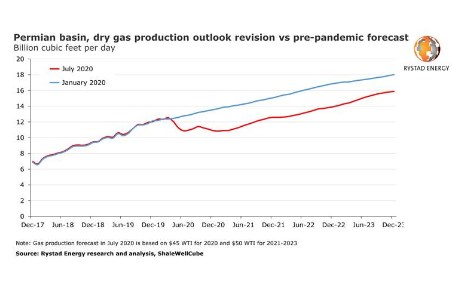 In the second half of the year, and into 2021 - 2023, Rystad Energy expects Permian gas production will see a rapid boost assuming a US$45 - 50 WTI environment, which is our base case. In the short-term, the reactivation of curtailments is expected to push basin-wide gas output back to 11.4 billion ft3/d in September, although further growth might be delayed until mid-2021 when activity is expected to recover substantially.

Regardless, gas output in the Permian is expected to return to record levels by late-2021, reaching 16 billion ft3/d by the end of 2023. This represents a downward revision of 2 billion ft3/d compared to our 2023 year-end view prior to the COVID-19 pandemic.

Earlier this year, Kinder Morgan faced some regulatory obstacles which have delayed the originally planned in-service date for the PHP. Additionally, in the current environment, the regional supply-demand balance does not require the immediate completion of the pipeline. Even if modest delays occur, Permian’s dry gas production potential will be able to wait for the pipeline to be completed until late-2021. Meanwhile, the Whistler pipeline has recently received new funding, which confirms that project-related work on the pipeline is occurring.

For other pipelines, however, serious concerns about feasibility remain and many projects have been delayed or put on hold. According to an April announcement the Pecos Trail evaluation is now on hold, and the Permian to Katy (P2K) pipeline also appears to be inactive. Tellurian has continued to advertise its future global gas market hub around Driftwood LNG, the Permian Global Ac-cess pipeline, but the likelihood of any investment decisions in the short-term remains low from our perspective.

On paper, the nameplate outbound capacity of all takeaway pipelines with local consumption (assuming the completion of the Whistler and PHP) will reach 17.5 billion ft3/d in 2022, enough to accommodate the increasing gas production in the basin through the mid-2020s. However, the future of utilisation rates on the Permian-Mexico pipe-lines (Roadrunner, Comanche Trail and Trans-Pecos) remains uncertain.

While the Villa de Reyes-Aguascalientes-Guadalajara (VAG) pipeline was finally completed and started service in June 2020, providing better connectivity between northern Mexico and Guadalajara, it might take several quarters (if not years) to see a significant increase in West Tex-as-Mexico gas exports, relative to the total capacity of outbound pipelines.

In May 2019 through April 2020, West Texas-Mexico gas exports fluctuated in the very narrow range of 0.58 billion to 0.67 billion ft3/d. The Trans-Pecos pipeline, specifically, flowed at around 170 million ft3/d in the first four months of 2020; only in the last few days have we recorded a jump in daily flows towards El Encino, with throughput surpassing 300 million ft3/d.

In the most optimistic scenario, we consider an increase in West Texas-Mexico exports to 1.5 billion ft3/d throughout 2H20-2021. However, in our lower case, exports remain flat at 0.7 billion ft3/d. Finally, in 2H19-1Q20 we frequently observed that pipelines flowed at rates exceeding nameplate capacity by up to 10%. This is considered to be unsustainable in the long-term.

“Regardless of the state of West Texas-Mexico exports, we conclude that in a US$45 - 50 WTI world, there will be a need for new gas takeaway projects from the Permian as early as 2023 - 2024. If these projects are not approved early enough, the basin might end up with another period of degradation in local differentials and potentially increased gas flaring,” says Rystad Energy’s Head of Shale Research, Artem Abramov.

Given the conservative investment philosophy of midstream companies and the WTI strip remain-ing around US$40 for the year, it is highly possible that any new pipelines will be approved too late, resulting again in a situation with insufficient infra-structure.

Read the article online at: https://www.worldpipelines.com/project-news/29072020/permian-update-suggests-flaring-will-increase-if-covid-19-delays-pipelines/