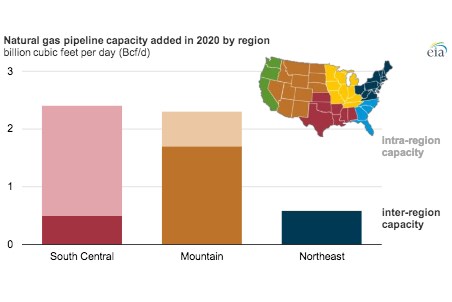 Projects that primarily serve to connect additional natural gas supplies to existing infrastructure include the following:

These Tallgrass Energy projects, which entered service in late June 2020, added 1.6 billion ft3/d of capacity in total. The 0.6 billion ft3/d Cheyenne Connector is a 70 mile, 36 in. pipeline that brings natural gas from eastern Colorado into the Cheyenne hub near the Colorado-Wyoming border. The Cheyenne Hub Enhancement Project increases interconnectivity and deliverability between the Rockies Express Pipeline and other interstate transmission systems, allowing natural gas production in the Rockies to access more markets with increased flexibility.

Three projects totalling more than 1 billion ft3/d that connect to the Waha hub are located in western Texas near Permian Basin production areas:

In addition to these projects, which account for most of the new pipeline capacity in the first half of 2020, the second phases of the Sabal Trail Pipeline (0.17 billion ft3/d) and the Hillabee Expansion (0.2 billion ft3/d) entered service in April, increasing deliverability to Southeast demand markets. The 0.3 billion ft3/d Empire North Expansion Project, which increases deliverability to western New York consumers on the Empire Pipeline, entered partial service in late June.

Although approximately 5 billion ft3/d of new pipeline capacity has entered service in the United States so far in 2020, an estimated 8.7 billion ft3/d of pipeline projects have been cancelled in 2020. These cancellations include the 1.5 billion ft3/d Atlantic Coast Pipeline, which planned to transport natural gas supplies from the Marcellus and Utica plays to electric power consumers in the Southeast, and the 0.65 billion ft3/d Constitution Pipeline, which would transport northeastern natural gas production into New England. At the regional level, the South Central region had the most potential added capacity cancelled, at 3.5 billion ft3/d, with the cancellations of the Permian to Katy Pipeline and the Creole Trail Expansion Project 2. EIA’s Natural Gas Pipeline Project Tracker is updated quarterly. EIA will publish the next update in October 2020.

Read the article online at: https://www.worldpipelines.com/project-news/25082020/eia-us-natural-gas-capacity-update-for-first-half-of-2020/