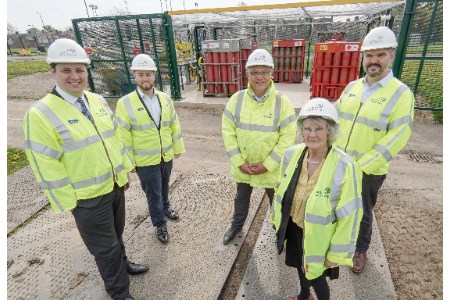 The testing is taking place on an area of disused land where gas pipes that once supplied homes on the site, while all still intact, are disconnected from the rest of the network.

The evidence gathered will be used to understand any changes needed for the potential conversion of the gas distribution network to transport clean burning hydrogen in the future.

The UK has set a target of achieving net-zero carbon emissions by 2050 to help reverse the impact of climate change. The natural gas used by the 85% of homes connected to the gas grid is responsible for over 30% of the UK’s carbon emissions, but hydrogen produces no carbon when burned, so could provide a greener energy solution for heating and cooking.

The South Bank research is part of the H21 project, a major collaborative UK gas industry hydrogen programme led by NGN, to assess the suitability of the UK’s existing gas network to carry hydrogen.

A hydrogen-fuelled gas network would make use of the vast assets which already deliver a safe, resilient and reliable source of heat the nation’s homes and businesses. A hydrogen conversion would be conducted in a similar way to the natural gas conversion of the 1960s and 70s with customers required to change gas appliances, such as boilers and cookers in their homes to similar hydrogen versions, which would work with existing radiators.

The test site, located between Ann Street and Harcourt Road, was chosen because around 70 homes were demolished on the land over a decade ago.

Neil Travers, H21 Project Manager for Northern Gas Networks said: “There are many different procedures carried out on the gas network on a day to day basis and it’s essential we understand how these may need to be adapted to ensure hydrogen can be delivered as safely and reliably as natural gas. Extensive research has already been completed off-grid but the difference at the South Bank is that we are using older gas mains, as are typical in many streets across the UK, for the first time. We believe this is a world first and we’re delighted to be in Teesside where there are already plans for hydrogen production and the potential of a wider hydrogen economy.

In addition to testing network procedures, the project includes the installation of two domestic hydrogen boilers. Produced by leading manufacturers, Vaillant and Baxi, the boilers have been connected to the network, and use hydrogen, which has been odourised to smell the same as natural gas for the first time.

Neil Travers, added "Natural gas, just like hydrogen, is odourless, so a distinct and widely recognised odour is added to warn everyone of a potential gas leak. Following decades of familiarising the public with the distinct smell of natural gas it is expected that, if hydrogen is widely used in the gas network, it will be odourised in the same way. It’s really exciting that this is another world first for Teesside as part of this project."

Tees Valley Mayor, Ben Houchen, said: “Teesside has firmly established itself as the go-to place to develop ground-breaking net-zero technology, and this research by Northern Gas Networks is yet another in the long list of innovative projects that are putting our region at the forefront of development of cleaner, healthier and safer industries of the future. We’ve long been a leader in hydrogen, already producing over 50% of the UK’s hydrogen supply and pushing forward research and development into rollout of hydrogen vehicles, so this project is building even further on local knowledge and expertise.

“Across Teesside, Darlington and Hartlepool, we’re getting on with delivering on our net-zero ambitions through world-leading projects just like this, delivering thousands of good-quality jobs for local workers in the process.”

Mary Lanigan, Leader of Redcar and Cleveland Borough Council, said: “This is hugely exciting and, once again, places our borough right at the hub of the green industrial revolution. This research has huge potential and it is wonderful that we are right there at the beginning. I want to congratulate NGN for developing this test which will gain international attention.”

Jacob Young, Conservative MP for Redcar: "This world-leading trial from Northern Gas Networks is putting Redcar on the map as a true pioneer for hydrogen. It's still the case that 85% of homes are connected to the gas network, but it is clear that the future lies in switching our gas network to 100% hydrogen.

NGN will now spend several months using the site to gather evidence and further understanding potential conversion of the gas network. Once the work is complete, NGN will restore the site to its former state.

Read the article online at: https://www.worldpipelines.com/project-news/25042022/a-world-first-for-teesside-as-hydrogen-research-gets-underway/