A total of 7.44 billion ft3/d of interstate natural gas pipeline capacity was added in the USA during 2021, according to the Energy Information Administration’s (EIA) recently updated ‘Natural Gas Pipeline Projects Tracker’. This amount was the lowest amount of capacity added to interstate transmission since 2016. 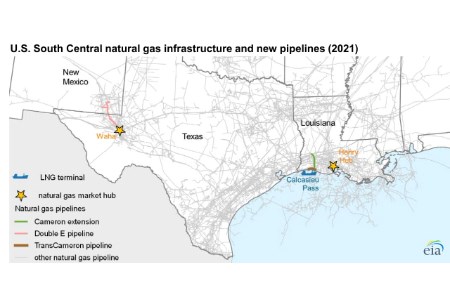 Interstate pipelines are those that cross state borders and those that serve export demand ? both at pipeline border crossings and at terminals exporting LNG. They are regulated by the Federal Energy Regulatory Commission (FERC).

More than two-thirds of the new interstate natural gas pipeline capacity, or 5.01 billion ft3/d, was added to transport natural gas into and within Texas and the Gulf Coast markets, which the EIA define as the South Central region. Most of the additional capacity is intended to serve growing LNG export demand, primarily by better connecting other interstate pipelines with LNG export terminals.

The other major project in the South Central region was the Double E pipeline, a 1.35 billion ft3/d, 135 mile pipeline that provides new capacity from the producing areas of the Permian Basin in southeastern New Mexico to the Waha Hub in West Texas.

The Northeast had the second-most interstate natural gas pipeline capacity additions totaling 1.60 billion ft3/d during 2021. About half of this new capacity was associated with two related projects:

In 2021, no interstate natural gas capacity additions were added in the Southeast region, the Pacific region, or the Gulf of Mexico, nor as part of the interconnections to Mexico.

Read the article online at: https://www.worldpipelines.com/project-news/24022022/natural-gas-interstate-pipeline-capacity-additions-decrease-in-2021/