Construction works for the Trans Adriatic Pipeline (TAP) have reached the highest elevation point of the project, around 2100 m above sea level, on the Ostrovica mountain. 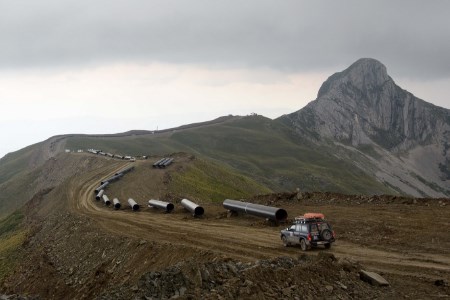 The Marta Pass connects the Korça and the Skrapari regions of Albania and is also the connection point between the west and the east segments of TAP. Construction works on this high-altitude section are one of the most complex technical endeavours of TAP, which passes through Greece, Albania, the Adriatic Sea and Italy. Nonetheless, despite transporting heavy machinery, equipment and steel pipes to over 2100 m above sea level, works are progressing as per schedule, following the highest safety standards.

Machineries are clearing and grading the right of way while pipes are being transported and strung along the route. TAP’s contractor installed a cable crane to transport pipes and other materials up the steepest slopes.

James Cooper, Deputy Site Representative of TAP in Korça, said: "This section is a major engineering challenge for the construction of a pipeline 1.2 m in diameter, given the difficult mountainous terrain with steep slopes, and the considerable altitude. Despite the difficult landscape, the project is progressing according to plan because we are committed to safety, we have properly trained our employees and we are using state-of-the-art technology. All these elements make our work easier and safer."

This means that TAP is one of the highest elevation pipelines in Europe.

Read the article online at: https://www.worldpipelines.com/project-news/21082018/tap-works-reach-the-highest-pipeline-point/