Asia will drive the global new-build trunk/transmission pipeline additions with a contribution of about 36% of the oil and gas pipeline length additions by 2024, says GlobalData, a leading data, and analytics company. 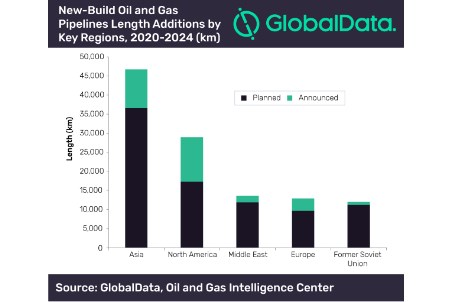 GlobalData’s latest report, ‘Global Length and Capital Expenditure Outlook for Oil and Gas Pipelines, 2020−2024: Asia Leads Global Pipeline Growth’, reveals that Asia is likely to have a new-build oil and gas pipeline length of 46 699 km by 2024. Planned projects that have received approvals for development account for about 78% of the total pipeline additions. The remaining 10 114 km are from early stage announced projects.

Soorya Tejomoortula, Oil and Gas Analyst at GlobalData, comments: “Asia is expected to witness start of operations of 109 new-build oil and gas pipelines by 2024. Of these, 79 are planned pipelines and the remaining are announced pipelines. The Power Of Siberia 1 (China Section) is the longest upcoming pipeline in the region with a length of 3371 km.”

GlobalData identifies North America as the second highest contributor to the global new-build oil and gas pipeline length additions by 2024, with a contribution of 22% of the total pipeline additions. Planned projects account for 60% of the total additions while the rest are announced projects with total length of 11 647 km. Keystone XL Project is the longest upcoming pipeline in the region with 1947 km.

The Middle East ranks third with 81 planned and announced oil and gas pipelines, which are expected to start operations by 2024 with a total length of 13 574 km. Of these, 54 are planned oil and gas pipelines and the remaining are early-stage announced projects. Basra–Aqaba Oil is the longest upcoming pipeline in the region with a length of 1680 km.

Read the article online at: https://www.worldpipelines.com/project-news/19062020/asia-to-lead-new-pipeline-construction-says-globaldata/