On April 15, US Vice President, Mike Pence, met with Alaska Governor, Bill Walker, and Alaska Gasline Development Corporation (AGDC) President, Keith Meyer. The Vice President made a stop in Alaska as part of his trip to Asia. 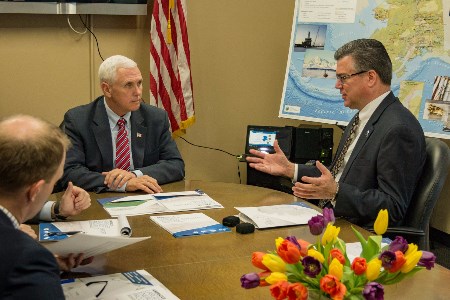 "We had an excellent briefing and discussion with Vice President Pence about the Alaska LNG project," said Meyer. The project will be the United States' largest energy export project and will help fortify the nation's ability to export LNG to the Asia-Pacific region.

The Alaska LNG project is expected to create 9000 - 12 000 jobs for design and construction, with approximately 700 - 1000 jobs for long term operations. Almost every labor craft will be required, including: boilermakers, carpenters, insulators, ironworkers, labourers, electricians, instrument technicians, operating engineers, pipe fitters, welders, and more. The project will monetise America's largest concentration of proven, conventional, but stranded, natural gas supply. It will provide low cost, clean energy for Alaskans as well as LNG exports to the Asia-Pacific region for generations.

"Our meeting was a perfect precursor to the vice president's trip to Asia," said Meyer. Over the coming days, Vice President Pence will meet with leaders in South Korea as well as Japan – two primary markets for Alaska LNG. Trade partnerships will be a primary discussion topic.

Pence is the latest in a string of recent high profile government officials to express interest in the Alaska LNG project. On 7 April, Chinese President Xi Jinping, returning to Beijing after meeting with President Donald Trump, visited Anchorage where he met with Walker and Meyer. A significant point of discussion between the three leaders was the Alaska LNG project and how Alaska and China are well positioned for a long term LNG trading relationship.

The Alaska Gasline Development Corporation (AGDC) is an independent, public corporation of the State of Alaska. Advancing the development and construction of a North Slope natural gas pipeline and LNG export terminal is its top priority.

Read the article online at: https://www.worldpipelines.com/project-news/18042017/alaska-lng-project-briefing-with-agdc-and-us-vice-president/