With global leaders in search of energy solutions that help achieve decarbonisation and enhance energy security, the global hydrogen energy transition market seems to be on track to becoming a major global energy source in its own right with the fuels use gathering momentum. 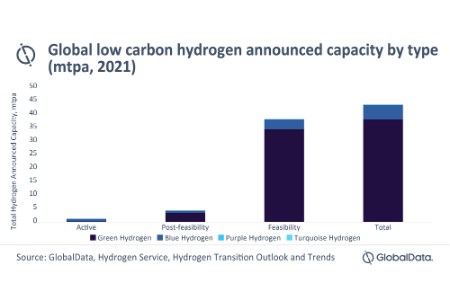 Interest in the low carbon hydrogen as a way to accelerate the energy transition is growing rapidly and the project pipeline now represents over 42 million tpy of potential capacity, according to GlobalData, a leading data and analytics company.

Barbara Monterrubio, Energy Transition Analyst at GlobalData, comments: “Hydrogen is becoming popular as a low or zero-carbon energy source in demand segments such as energy storage, buildings, and transportation. Many countries have begun to consider a hydrogen-based economy to support decarbonisation. Green hydrogen presently has a small share in the hydrogen production mix but is poised to increase, given the ambitious targets announced by countries and companies.”

By the end of 2021, the low carbon hydrogen sector had over 42 million tpy capacity of pipeline projects, coming mostly from green hydrogen where the pipeline for electrolysers is now almost 300 GW. To date, over two thirds of the 42 million tpy of upcoming capacity is coming from the Former Soviet Union, Europe and Oceania, of which 87% and 12% comes from green and blue respectively, and less than 0.5% coming from purple and turquoise projects. During 4Q21, 33 countries announced new low carbon hydrogen plants, with projects in Australia, Chile, and the US adding 3 million tpy capacity to the global hydrogen pipeline.

Monterrubio, continues: “Countries in these regions are driving the use of hydrogen and are global leaders in hydrogen policy. They are also well-positioned to grow a hydrogen economy but will likely require imports to achieve their low carbon aims."

Australia continues to lead the world's upcoming capacity with over 8 million tpy across 90 different green hydrogen hubs and projects in the country, where green ammonia export projects are positioned to take advantage of the expected growth in low carbon hydrogen demand of Japan, South Korea, and China. North America and the Middle East lead in blue hydrogen capacity due to the low cost of natural gas. In North America, demand sectors will include oil refining, chemicals, industry, and transportation.

Monterrubio adds: “This year is crucial for the sector as the first large scale projects look to reach the Final Investment Decision (FID) stage and start construction. This is the case with the 2GW Saudi Neom green hydrogen project in Saudi Arabia, which has recently started engineering and procurement works, and is looking to start construction this year for completion in 2026.”

Read the article online at: https://www.worldpipelines.com/project-news/17022022/global-low-carbon-hydrogen-pipeline-projects-reach-42-million-tpy/