GAZ-SYSTEM has signed the agreement on co-financing the Baltic Pipe construction works under the Connecting Europe Facility with the Innovation and Network Executive Agency of the EU. The ceremony of signing the agreement for the subsidy in the maximum amount of nearly €215 million, took place in Brussels on 15 April 2019. 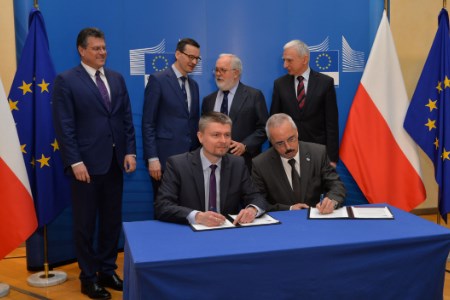 The event was attended by Mateusz Morawiecki, the Prime Minister of Poland, Piotr Naimski, the Governmental Plenipotentiary for Critical Energy Infrastructure, Maroš Šefcovic, the Vice-President of the European Commission, Miguel Arias Cañete, the EU Commissioner for Climate Action and Energy, Dominique Ristori, the Director General for Energy and Tomasz Stepien, the President of GAZ-SYSTEM.

The subsidy will be allocated for the implementation of construction works both for the offshore pipeline connecting the transmission systems of Poland and Denmark, as well as for the expansion and improvement of the Polish natural gas transmission system.

In the opinion of Tomasz Stepien, President of GAZ-SYSTEM, obtaining the further support confirms that the Baltic Pipe is of importance not only for Poland, but for the entire European Union. “From the point of view of our country, the gas connection between Poland and Denmark has the strategic dimension and it is needed to diversify the supplies. The investment is also beneficial for the EU, which seeks to increase trade and competitiveness of the European gas market” stressed Tomasz Stepien.

Signing the agreement on co-financing constitutes the implementation of the EU Member States decision about granting the financial support for the Baltic Pipe project under the CEF Programme, taken on 23 January 2019. The financial assistance was granted for the action titled “Construction works for the PCI infrastructure cluster 8.3” as a result of the CEF Energy second grant competition conducted in 2018.

In January 2019, the European Commission granted the project with co-financing for the construction works in the maximum amount of €215 million. In 2017 and 2018 the subsidy included engineering works and amounted to the maximum of €51.45 million. Under the 2015 competition the project received the assistance of nearly €0.4 million to conduct the feasibility study. The total amount of the EU support for the Baltic Pipe project is maximum €266.77 million.

The Connecting Europe Facility (CEF) is a key EU funding instrument to promote growth in three sectors – transport, energy and digital services. To qualify for the grant, the project should have the PCI (Project of Common Interest) status. It is a status granted to projects with the purpose of strengthening the European internal energy market by reaching the EU’s energy policy objectives of affordable, secure and sustainable energy. The Baltic Pipe project was included in all existing PCI lists adopted in 2013, 2015 and 2017 respectively.

The Baltic Pipe is a strategic project aimed at creation of a new corridor of gas supply on the European market. From October 2022, it will enable the import of 10 billion m3/y of natural gas from the deposits on the Norwegian Continental Shelf.

Read the article online at: https://www.worldpipelines.com/project-news/16042019/baltic-pipe-co-financing-agreement-signed/