Pantheon Resources plc ('Pantheon' or 'the Company'), the AIM-quoted oil and gas company with a 100% working interest in all of its oil projects spanning c. 153 000 acres adjacent and near to transportation and pipeline infrastructure on the Alaska North Slope, is pleased to provide the following update. 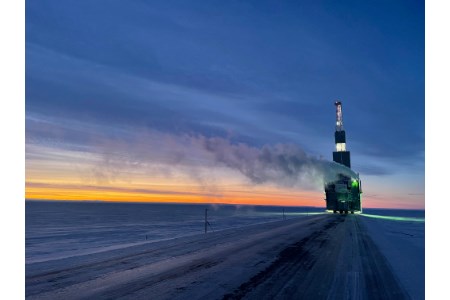 Pantheon confirms that Theta West #1 has reached total depth (TD) at 8450 ft having drilled through both the upper basin floor fan (UBFF) and lower basin floor fan (LBFF) target horizons, which are Brookian age, and having encountered approximately 1160 gross ft of hydrocarbon bearing reservoir across both horizons combined. Data received so far indicates the reservoir quality is superior to Talitha #A, with high quality light oil encountered across the entire section. The Company is now preparing to set casing prior to flow testing within both horizons over the coming weeks.

The UBFF was encountered between 6800 and 7000 ft, and the LBFF was encountered between 7450 ft and 8410 ft depth. The top of the UBFF is located approximately 150 ft higher than pre-drill estimates. Well bore conditions in the shallower sections above the primary objective, combined with the extremely cold weather, have prevented the Company from conducting wireline operations in the open hole. However, the Company undertook logging while drilling (LWD) operations which included resistivity, gamma ray, neutron density, formation density along with gas chromatography readings during drilling which has provided excellent quality data, indicating the presence of hydrocarbons in the targeted horizons some 1500 ft structurally higher (updip) from the Talitha #A well, 10.5 miles to the southeast. Samples analysed to date by AHS/Baker Hughes, which have been contracted to undertake volatiles analyses (VAS), has also confirmed the presence of light oil within the UBFF and the top portion of the LBFF, consistent with the LWD data. AHS/Baker Hughes is yet to complete analysis of the lower portion of the LBFF.

Operations at the well site have been impacted by the extremely cold temperatures (-55°C wind chill), which have caused some disruption through a number of equipment failures and a reduced ability for personnel to work outside in such extreme conditions. Due to the well bore conditions and weather, the Company was unable to core or to collect open hole wire line logs, however, the data gathered to date has been of sufficient quality to allow the Company to analyse the well bore.

Testing of the slope fan system (SFS) is now underway and results will be reported when completed. As with the basin floor fan at Talitha #A, the SFS is also a secondary target in a suboptimal location in this well, and thus the objectives for testing are to (a) prove the movability of hydrocarbons, and (b) to confirm high quality light oil. No resource estimates have been provided to date for the SFS.

Bob Rosenthal, Technical Director, said: “This an encouraging result. Our initial assessment of 1160 ft of light hydrocarbons 1500 ft structurally updip from Talitha, with better porosities, is in line with our pre-drill geologic model. It is very much a case of so far, so good.”

Jay Cheatham, CEO, said: “We are cautiously optimistic that testing will prove the commercial viability of the BFF at this location, with all indications so far supporting our pre-drill assumptions. We look forward to updating shareholders in due course.”

Read the article online at: https://www.worldpipelines.com/project-news/15022022/pantheon-resources-plc-theta-west-1-operational-update/