The construction progress of the Trans Adriatic pipeline (TAP) was presented by TAP AG’s Country Manager for Greece, Katerina Papalexandri, at the 2nd Thessaloniki Summit held on 5 - 6 October at the Ioannis Vellidis Congress Centre. 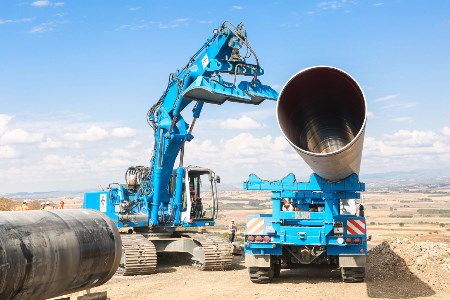 In the context of ‘the new energy map in the region’ panel, Papalexandri noted the importance of the project for Greece, the wider area of southeast Europe, as well as the continent as a whole. She also referred to the steady progress – well within schedule and on track – of works in all three northern Greek prefectures traversed by the pipeline.

Additionally, more than 95% of the line pipes for the Greek section have been delivered to the ports of Kavala, Thessaloniki and Alexandroupolis, while hydrotests are also being conducted – one of the final stages of construction.

Papalexandri also referred to the critical importance of collaboration between TAP and local communities, not only for the construction of the project, but also for the design and execution of the extensive €32 million Social and Environmental Investments Programme that TAP is voluntarily implementing across the project-affected areas.

In conclusion, Papalexandri cited the benefits that TAP brings to Greece and its legacy to the country, "to the economy, society and culture"; on an energy, strategic and geopolitical level; in technology and infrastructure."

Read the article online at: https://www.worldpipelines.com/project-news/13102017/over-50-of-tap-pipes-have-been-laid-in-greece/