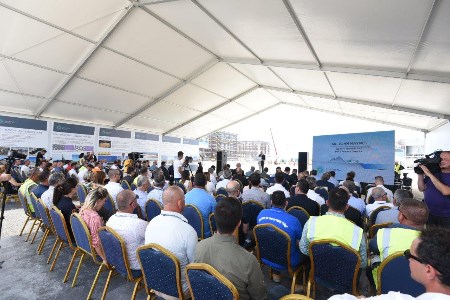 Prime Minister Rama underlined the strong collaboration between TAP and Albania. “The Albanian authorities’ speedy delivery of permits will encourage additional foreign direct investment,” Mr. Rama noted. According to the Head of Albanian Government, “TAP is a success story and, as such, its example leads to other investments in energy projects, including IAP. In fact, TAP’s example has already encouraged several other international companies to show interest and invest in the oil and gas sector in Albania.” Branding TAP as a “reference project for other investors,” Mr. Rama concluded that despite the complexity of procedures at times “TAP was fully compliant with Albanian legal requirements.”

The Infrastructure and Energy Minister Gjiknuri emphasised the importance of TAP for the economy and its strategic significance for the future of the country. According to the Minister, “TAP will have a positive impact on the country’s gasification and its energy sector in general.” The Minister stated that “TAP was the first energy project of this scale to be implemented in Albania and its progress was impressive.” Speaking about TAP’s positive impact on the country, Minister Gjiknuri highly appreciated “the tangible know-how transfer” that both the Albanian workforce and local companies have gained through their engagement with the project.

TAP Managing Director Luca Schieppati said that the event marked another milestone for Albania’s energy journey. “We believe that TAP will become a key element for this future journey, contributing to energy security, diversification and decarbonisation. Benefiting from the continued support of the Albanian Government, local authorities and local communities, TAP will continue to progress, delivering a modern, safe and robust pipeline, supporting the delivery of new gas in the country and beyond.”

TAP Project Director John Haynes added: “We’re one step closer to completing the project and bringing gas to Europe. TAP’s compressor station in Fier is the most important above ground installation in Albania and Fier will be one of TAP’s exit points planned in Albania. This will also be the starting point of the Ionian Adriatic Pipeline (IAP), which further elevates the strategic importance of Fier and Albania in the wider region.”

TAP’s Country Manager Albania Ad-interim Michele Elia stated that he “wanted to thank the Albanian central and local governments for being very supportive to TAP and all TAP and contractors’ employees for their challenging work towards delivering the pipeline in line with schedule and applying the highest safety standards.”

The event participants had the possibility to see the turbo compressors first-hand and understand some of the challenges tackled during the construction of the compressor station in Fier.

The Fier compressor station area measures 162 970 m2, which equals approximately 25 football pitches. Construction works are due to be completed in March 2019 and the compressor station is expected to be ready for operation in 4Q19.

Read the article online at: https://www.worldpipelines.com/project-news/12062018/tap-marks-the-installation-of-the-turbo-compressors-in-albania/