In 2006, large gas reserves were discovered in the south of Tunisia. These are to be developed by ETAP and OMV as part of the Nawara project. It is expected that the produced gas at the field will provide approximately 11% of Tunisian gas consumption.

ETAP and OMV awarded Max Streicher GmbH & Co. KG aA / BouchamaouiIndustries LC the execution of a 374 km long pipeline. Notably, Max Streicher S.p.A. carries out pipeline work on behalf of the mother company. Within the project, Streicher and Bouchamaoui are responsible for execution, engineering and procurement. Almost half of the project has already been completed. 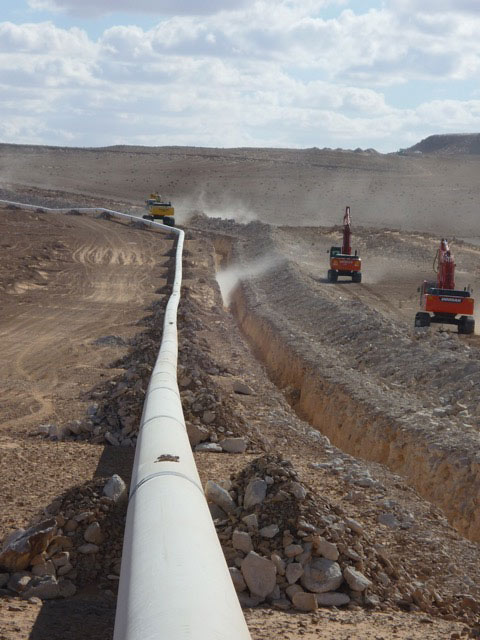 The 24 in. pipeline running from the gas processing facility in the south of Tunisia to Gabés, on the east coast, is expected to be completed in 2017. The project is characterised by the geographical and political conditions on site.

Field activities began in April 2015. In addition to the construction of the pipeline, the contract also includes the execution of intermediate valve stations, pig launching and receiving facilities and interconnections with new plants and existing facilities – including the central gas processing facility on the Nawara gas field.

In order to perform several working activities simultaneously and therefore allow for a quick working process, three camps were installed along the route. In the south, the pipeline route runs primarily through the desert.

“The working conditions are completely different from Europe,” Giovanni Muriana, Managing Director of Max Streicher S.p.A. commented. “In summer, the temperature reaches up to 45 degrees, in winter, sandstorms can suddenly occur.”

The conditions mean that the working day starts very early, at about four o’clock in summer, and employees are protected against sand and noise using special equipment. As there are hardly any infrastructural limitations in the south, activities have been progressing quickly.

However, in the north, the route runs through agricultural environment. Consequently, progress is expected to slow down towards the north, while approaching the city of Gabés.

With the development of this project, Max Streicher S.p.A. has stepped into a new market. “The Nawara project in Tunisia is an essential experience for us in North Africa,” Muriana says. “The country is expecting an important development in the oil and gas business, although the current low oil price is slowing down some investments. We will keep an eye on the business development and investment possibilities in this region in the future.”

Read the article online at: https://www.worldpipelines.com/project-news/10082016/max-streicher-provides-update-on-tunisian-pipeline-contract/