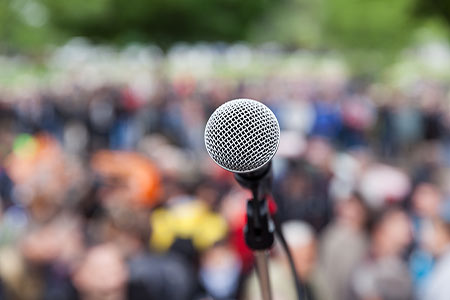 Outrage over a planned gas pipeline that isn’t needed and threatens the public’s health and safety drew concerned citizens from New Jersey and Pennsylvania to a rally today, where they called on policymakers to put the public first and stop the PennEast project.

HALT (Homeowners Against Land Taking) PennEast, a group of landowners along the pipeline’s path and other concerned citizens, were joined by other groups in a massive display of opposition. The focal point of their protest was yesterday’s decision by the Federal Energy Regulatory Commission (FERC) to issue a final Environmental Impact Statement for the pipeline proposal that has drawn bipartisan opposition from lawmakers in the two states.

A large crowd turned out for the patriotic-themed rally against PennEast at the Prallsville Mill in Stockton, NJ. Led by a George Washington re-enactor on horseback reading a “Citizens’ Declaration of Opposition to PennEast,” they called on FERC and other state and federal decision-makers to reject a PennEast application that falls far short of offering proof of need or safety.

Fife and drum musicians in period costume and group singing led by community organisers provided spirited demonstration of the strong public criticism of the project.

“We stand united in our continued opposition to the proposed PennEast pipeline. PennEast has failed to demonstrate the need for this redundant fossil fuel pipeline, and does not address the substantive concerns put on the record by Hopewell Township, our Board of Health and residents, and other federal and state agencies,” said Kevin Kuchinski, Mayor, Hopewell Township. “We are concerned about the irreparable harm this pipeline would cause to our drinking water and to how it would degrade our environment, threaten endangered wildlife in New Jersey, and put our citizens in danger. PennEast is seeking to take advantage of public investments in open space and preserved farmland for private gains, and utility customers will ultimately be left holding the bag, paying higher natural gas rates.”

“FERC didn’t properly weigh impacts to the human environment against supposed public benefits of the project as required by federal law. FERC blithely assumes ‘If they have paying customers, it must be for the public good.’ It never performs a deeper analysis into who those customers are, or what their motives may be,” said Mike Spille, founder – West Amwell Citizens Against the Pipeline. “In PennEast’s case, those ‘customers’ are actually the owners of the pipeline. They are creating an artificial market that only benefits them.”

“We said ‘no’ to taxation without representation, and today we say ‘no’ to certification without justification,” said Susan Meacham, member of HALT PennEast and Concerned Citizens Against the PennEast Pipeline. “This country defended itself against an oppressive foreign government. Today, Americans are fighting dirty fossil fuel projects that benefit huge corporations. We are defending our constitutional rights to keep our homes and communities safe from PennEast’s corporate greed.”

“The route crosses Holland and Alexandria Townships, both within the Highlands Region that provides the water supply for 70% of New Jersey,” said Michael Keady, VP of the Board of Trustees of the NJ Highlands Coalition. “FERC and PennEast have stuck their heads in the sand and refused to recognise that the Highlands Act requires special protections for Highlands Resources such as Highlands Open Water Buffers, upland forest, steep slope areas, prime groundwater recharge areas, and critical habitat for threatened and endangered plants and animals.”

“I want to reflect on what I have learned in the last two and a half years,” said Nancy Wilson, a resident of Holland Twp., NJ. “PennEast is a bad idea for everyone. It is a bad economic investment because fossil fuels are being phased out in favor of less environmentally harmful energy sources. It is bad for the environment because of the destruction of our forests and threat to our water supplies. It is bad for each town that will have to endure truck traffic, blasting and other construction impacts. It is bad for each individual landowner who may have to submit to eminent domain if this pipeline is approved. It is bad for everyone and must not happen!”

Linda Christman, founding member of Save Carbon County, says her concern is the lack of due diligence shown in the PennEast application and supporting materials. Christman stated, “If we can’t trust their work on the application, can we trust them to responsibly maintain an explosive pipeline?”

Displayed at the rally was a large map of the PennEast route showing proximity to schools, historic sites, streams, and other fragile natural features. Attendees, from children to senior citizens, placed small flags onto the map to show where they live, work or play.

Read the article online at: https://www.worldpipelines.com/project-news/10042017/rally-occurs-over-penneast-pipeline/