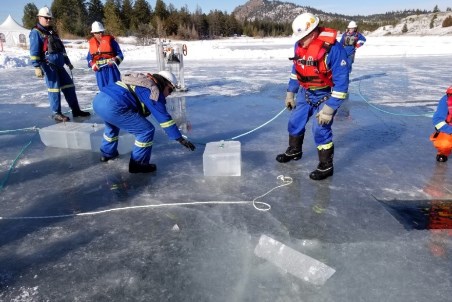 Earlier this year, leaders from all three organisations endorsed the initiative, which is aimed at identifying opportunities to improve TMC’s and the IAMC-TMX’s respective Indigenous monitoring programmes for the Trans Mountain Expansion Project (project).

“This agreement represents how we are fundamentally transforming the way the CER works to advance reconciliation with Indigenous Peoples,” says CER Acting-CEO Sandy Lapointe.

“Collaborating with the IAMC-TMX and Trans Mountain is helping us develop best practices in Indigenous monitoring and will inform how we approach and expand Indigenous inclusion in oversight for all future projects.”

These programme discussions are even more critical in light of the COVID-19 pandemic where the CER, Fisheries and Oceans Canada (DFO), Parks Canada, and IAMC-TMX are finding innovative ways to continue to provide regulatory oversight.

“In-field inspections are still being performed, and work is ongoing to ensure Indigenous monitors and federal staff can conduct inspections safely, consistent with public and occupational health requirements,” says Lapointe.

By learning more about the unique objectives and strengths of each other’s programmes, the three parties found common ground and developed a shared goal: to ensure the project is built safely, in full regulatory compliance, with Indigenous participation in oversight, and with minimal harm to the environment and Indigenous interests.

“Through this new initiative, we are seeking to better ensure the knowledge, values, and perspectives of Indigenous communities are respected and incorporated into how the project is built, with the overall aim of advancing Indigenous interests in the oversight of the project”, says Councillor Wilsdon.

“The relationships that we’ve developed will help all parties manage issues that might arise during construction.”

The early results of this work will improve the Indigenous monitoring programs by:

The co-development initiative between the three organisations began in September 2019, when the CER requested Trans Mountain to collaborate with the IAMC-TMX outside of the regulatory process to assess and explore improvements to Indigenous monitoring programmes.

Since then, senior representatives of the CER, TMC, and the Indigenous Caucus, facilitated by Natural Resources Canada, have met numerous times to discuss issues related to participation and engagement, Indigenous knowledge, transparency and communication, capacity, coherence across programmes, and independence.

The initiative has resulted in agreement on a framework of action, and the work to implement that framework continues. “The parties have not reached agreement on every issue, but we have made some important progress toward improving the transparency and capacity of both the IAMC-TMX’s and TMC’s monitoring programmes”, says Chief Harvey McLeod, Chief of the Upper Nicola Band and an IAMC-TMX member.

Trans Mountain views the collaboration to explore Indigenous monitoring best practices as a means to work proactively with the Indigenous Caucus of the IAMC-TMX and regulators to find solutions that everyone can support.

“This collaboration allows for the best from all parties to be incorporated into shared objectives” says Ian Anderson, Trans Mountain President and CEO.

The IAMC-TMX brings together 13 Indigenous representatives and six senior federal officials to address shared interests such as Indigenous monitoring, Indigenous inclusion in emergency management, and mitigating the impacts of temporary labour camps. Indigenous members are selected on a regional basis by the 129 impacted Indigenous communities and participate “without prejudice” to their views on the project. The Committee is not a rights-holding body and is not a forum for consultation.

Next steps for the parties are to implement the short-term deliverables and explore other ways to work together to manage issues during construction. The parties are also interested in sharing best practices and lessons learned with other governments and industries that may benefit from similar approaches.

Read the article online at: https://www.worldpipelines.com/project-news/09072020/trans-mountain-pipeline-joint-agreement-on-continuous-indigenous-monitoring/