The Trans Adriatic Pipeline (TAP) AG announces that construction in Greece, the pipeline’s greatest geography, advances on time, on track and on budget. Thanks to the efforts of the over 3000 people working for the project, 13 months after the Inauguration Ceremony works have significantly progressed in two of the three northern Greek prefectures to be traversed by the pipeline: eastern Macedonia-Thrace and central Macedonia. 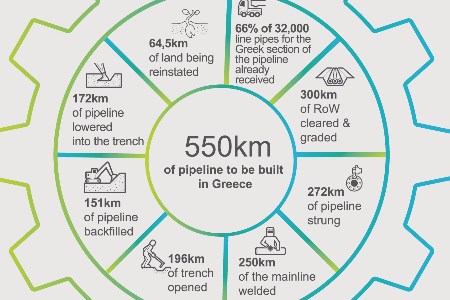 As of end May 2017, out of the approximately 550 km of pipeline in total to be built on Greek soil, TAP’s contractors have already:

At the same time:

TAP AG’s Country Manager for Greece, Rikard Scoufias, said: "I would like to thank every one of the 3,000 people working daily for the construction of the pipeline. Their professionalism, dedication and quality of work ensure the efficient implementation of this big project."

As TAP’s construction continues, the direct benefits arising for the local host communities, as well as the country in general, are also becoming more evident:

With regard to the €32 million socio-environmental investment (SEI) programme that TAP has voluntarily committed to implementing, 47 such investments initiatives have already been committed in all three northern Greek prefectures, their total value amounting to €1 150 000. As per TAP’s SEI strategy and its selection pillars, already implemented initiatives include:

Read the article online at: https://www.worldpipelines.com/project-news/09062017/over-3000-people-working-on-greek-segment-of-tap-pipeline/