Pipeworx Ltd. is committed to reconciling unity with Indigenous communities by not just speaking intentions and meeting requirements, but through proactive collaboration that makes positive and lasting impacts on the communities. There is no greater example of reconciliation than the partnership between Pipeworx and Alexander Business Centre (ABC). 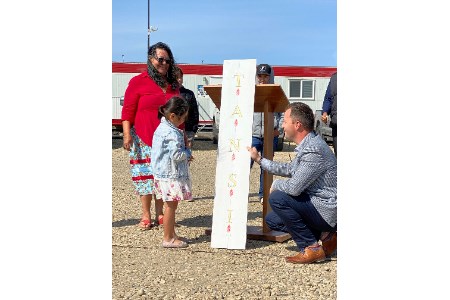 Pipeworx, a PLH Group company, is one of the most innovative and respected pipeline contractors in Western Canada.

“When we wanted to create our own Tier 1, 100% nation-owned horizontal directional drilling (HDD) business, Pipeworx stepped up to the plate. They were strategic and really helped us create this business. To me, that’s what reconciliation is,” said ACC Chief Operating Officer, Kris Vanderburg.

Before the business was even fully operational, Pipeworx and ACC signed a two-year HDD contract commitment, giving ABC the certainty they needed to plan for future growth. Pipeworx and ACC are providing the installation of 16 in. and 12 in. pipelines running 254 km throughout Alberta for Keyera’s Key Access Pipeline System (KAPS).

The partnership will not end with the conclusion of this project. The organisations are already strategically partnering on pursuing new work together.

“ACC employees know the industry and their trades while aligning with our safety and quality standards. I am confident that the Pipeworx promise of quality, trust, reliability, and safety will continue to be upheld throughout the project,” said Pipeworx Senior Vice President and General Manager, Chad Johannsen.

“We would love to provide opportunities and offer inclusion for other nations, as well, stemming a ripple effect throughout the energy industry to create lasting changes for these communities,” said Pipeworx Indigenous Relations Manager, Chad Wagner.

“Pipeworx is taking small steps that can actually lead to generational changes in the community. What happens if all companies are like Pipeworx and took a step? Think of the changes that would make in the community,” challenged Vanderburg. “I commend Pipeworx for moving the needle, and hopefully others can follow their lead.”

Read the article online at: https://www.worldpipelines.com/project-news/08022022/pipeworx-partners-with-indigenous-community-to-create-reconciliation-and-change/