GlobalData reports that 81 new crude and natural gas projects will start operations in Europe between 2018 and 2025. By 2025, the projects will contribute around 1.496 million bpd to global oil production and close to 4.7 billion ft3/d to global gas production, according to GlobalData.

To read the full article
"GlobalData: 81 new oil and gas projects in Europe by 2025"
Please sign in or register for FREE 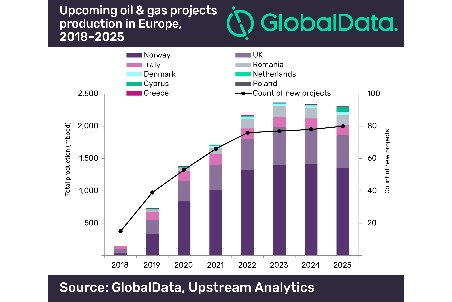 The majority of new developments (45 projects) fall under an early-stage category, while 36 new projects have progressed to well-defined development plans.

Differentiating for the primary resource type, conventional oil and gas projects account for 38 new projects each. The region will see five heavy oil projects among its upcoming developments.

The UK will lead with a total of 37 projects, followed by Norway with 28 and Italy with six. Norway will drive natural gas production, contributing 1.6 billion ft3/d to the region’s gas production by 2025. Norway will also be responsible for the largest contribution to oil and condensate production with the country’s upcoming projects adding 1.072 million bpd over the eight year period.

Among companies participating in new projects in Europe, Statoil ASA will see the highest contribution to its oil and condensate production from upcoming fields with 409.2 million bpd by 2025. Upcoming projects in Europe will contribute 156.1 million bpd to Petoro AS and 146.5 million bpd to Lundin Petroleum AB by end of the eight year period. On the gas side, Statoil ASA will see 579 million ft3/d brought in by new projects by 2025, followed by Po Valley Energy Ltd and OMV AG with 324 million ft3/d and 323 million ft3/d respectively.

Read the article online at: https://www.worldpipelines.com/project-news/06042018/globaldata-81-new-oil-and-gas-projects-in-europe-by-2025/