A busy week in the world of decarbonisation, with a key event taking place in the House of Lords on 1 Tuesday November, organised by the HyDeploy consortia, and hosted by Lord McNicol of West Kilbride. The event was attended by 87 high-profile guests including key energy industry leaders, government officials and parliamentarians, where they learned about the important findings from the most recent trials of blended hydrogen gas being injected into a public gas network. 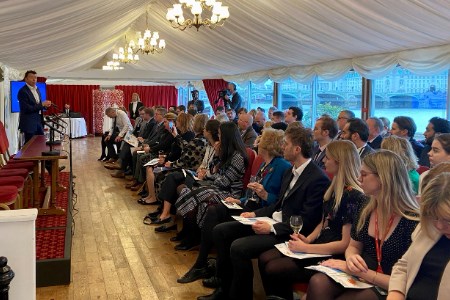 HyDeploy2 delivered 20% blended hydrogen with natural gas in a second trial for around 1600 residents in the village of Winlaton, near Gateshead. This ground-breaking project has identified an innovative solution to reduce carbon emissions. With more than 83% of UK homes connected to the gas grid, hydrogen blended gas does not require expensive or disruptive changes to home appliances, nor does blending disrupt the work of thousands of engineers.

The HyDeploy2 project findings provides enormous potential for significant decarbonisation of energy – as the report confirms that no changes happen when a blend of hydrogen is used both in terms of safety and overall user experience. This is convincing evidence that hydrogen blending could be rolled out rapidly, which would normalise the use of hydrogen and help enable the future UK hydrogen economy.

Tim Harwood, Hydrogen Programme Director at Northern Gas Networks said “We’re delighted to have successfully completed the first HyDeploy blending project on a public gas network and thank the community in Winlaton for their support. The network continued to perform as expected, demonstrating the ability of the existing gas distribution network to transport a hydrogen blend, and proving that blending can play a role in decarbonising heat with no disruption to customers, who continued to use their gas without making any changes or noticing any differences”

Blending is already something widely accepted in other fuels – such as E10 petrol, a biofuel made up of 90% regular unleaded and 10% ethanol. Standard unleaded fuel contains up to 5% ethanol and can be used in any petrol-engine car without problems or the need for modification. The same can be said for using blended hydrogen in people’s homes and for businesses too.

Professor Zoe Robinson, Keele University's Director for the Institute for Sustainable Futures said "The HyDeploy2 trial builds on the first HyDeploy trial on the private gas network at Keele University. As part of both studies; research by Keele University explored the residents' perceptions of using hydrogen in their own homes. This provided a unique insight into how the public might react to a wider rollout of blended hydrogen in the home and demonstrated that with the principles of no additional cost to the consumer, use of genuine low carbon hydrogen, and effective communication approaches, that customer perceptions should not be a barrier to the roll out of blended hydrogen."

The high-profile launch event in the House of Lords offered a chance for energy industry and other interested stakeholders to join a conversation on the practical ways that blending could be delivered to existing gas network consumers and how to address challenges faced as well as ways to accelerate the delivery of this innovative scheme to UK gas consumers.

Chris Manson Whitton, CEO of Progressive Energy said: “Hydrogen blending will play a critical role in unlocking the UK’s hydrogen economy by providing a substantial demand for low carbon hydrogen which will stimulate investment in the sector. HyDeploy has demonstrated the feasibility of blending hydrogen across the existing gas distribution network, to homes and businesses and to a wide range of industrial settings. It is time for policy to catch up with industry and sanction hydrogen blending to capitalise on this golden opportunity.”

Cadent’s Chief Strategy and Regulation Officer, Dr. Tony Ballance said “These important findings from the HyDeploy2 trials demonstrate that blended hydrogen gas can be put into the gas network safely without any changes.

“The gas networks are ready to deliver blended gas to consumers. We now need quick, positive actions from government to enable policy for hydrogen blending to begin, and we can make it happen.”

Blending truly is a low cost, low disruption, no regrets option to enabling growth in the hydrogen economy and reducing emissions from millions of homes and business in the meantime. The HyDeploy evidence reports will be submitted to government early next year, ahead of a decision around the wider blending of hydrogen in the UK gas network, which is due to be taken later in 2023. More information on the project can be found at hydeploy.co.uk

Read the article online at: https://www.worldpipelines.com/project-news/04112022/report-launch-success-for-hydeploy2/