Trans Adriatic Pipeline AG (TAP AG) commenced the formal land exit process of the temporary leased land for the construction of the Trans Adriatic pipeline (TAP) in June 2017. A small ceremony was held on 29 June with some of landowners to mark this key milestone. To date, more than 420 parcels have been returned to the landowners and land exit agreements have been signed. 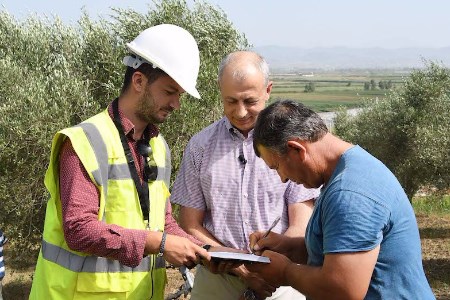 The process of land exit and the return of the land to the owners commenced in Fier (Albania) immediately after construction works for some of the pipeline sections in this region were completed. Before the land was returned to the respective landowners, it was reinstated to its previous condition. Currently, several landowners and land users have already started planting, in line with the normal agricultural cycle, in accordance with TAP AG safety requirement.

TAP AG Country Manager for Albania, Shkëlqim Bozgo, said during the ceremony in which the first parcels were returned to the landowners: “As we stated at the beginning of the construction works, most of the parcels in Fieri region where the construction works have been completed are now either fully or partially reinstated. The TAP project has acted in accordance with the best international practice, to ensure that land productivity was maintained as far as possible. We are happy to see that the land being handed over is already being cultivated by landowners and land users.”

“I did not expect that construction works in my parcel would be completed so soon. Now that the construction works for the pipeline have been completed in my parcel, I started planting corn. This is what I used to grow before as well, and until now, the crop is growing normally,” said one land owner during the signing of the land handover agreement.

The land easement and servitude process was implemented in accordance with the international standards of the European Bank for Reconstruction and Development (EBRD). TAP AG has compensated landowners and land users for leasing the land and for the crop loss for a period of two years, whereas in many cases the land has been handed over in less than one year.

Information on the land easement and acquisition process in Albania:

Read the article online at: https://www.worldpipelines.com/project-news/04072017/land-exit-process-begins-in-albania-for-tap-pipeline/