At the end of July 2018, the Trans Adriatic Pipeline (TAP) completed the construction of the 1.5 km micro-tunnel in Skrapar, Albania. The micro-tunnel was built in approximately six months after works started in February 2018. 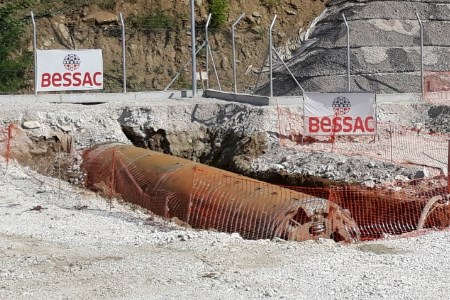 The 1.5 km micro-tunnel crosses a challenging mountainous segment and connects the eastern and the western TAP pipeline segments.

TAP’s contractor Spiecapag and TAP subcontractor Bessac were able to complete the micro-tunnel construction within schedule and to a high-level of accuracy. A total of 50 local workers were engaged in 24 hr shifts for this challenging engineering undertaking.

Skrapar’s landscape poses many challenges to the pipeline construction, given the 2100 m above sea level elevation, its geological composition and the difficult terrain with numerous steep slopes.

Following the tunnel boring tradition, the state-of-the-art boring machine used was given a name, specifically ‘Karl Gega’, in honour of one of the most renowned transport and infrastructure engineers in Europe.

The successful completion of the 1.5 km micro-tunnel is one of TAP’s main technical achievements in Albania. The importance of this milestone was also noted in February 2018, when the Deputy Minister of Infrastructure and Energy, Enis Aliko, the Skrapar Mayor, Nesim Spahiu as well as high-level TAP representatives and its contractors marked the start of this project.

Read the article online at: https://www.worldpipelines.com/project-news/02082018/tap-completes-pipeline-connecting-micro-tunnel/