After several months of intensive development and testing, 2G Robotics will be publicly launching the ULS-500 PRO at the April 2017 Ocean Business Exhibition in Southampton, UK. 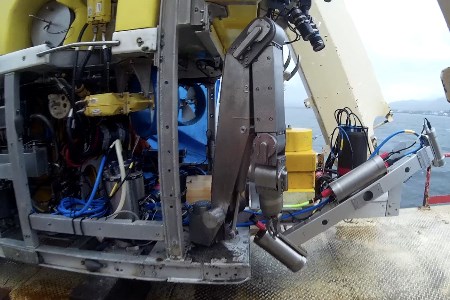 The ULS-500 PRO improves upon 2G Robotics’ proven dynamic underwater laser scanning solution by increasing the ease with which surveys can be performed. The ULS-500 PRO boasts industry leading sample rates facilitating faster vehicle speeds while providing higher density point clouds. The system’s higher sensitivity sensor provides more accurate data capture and has achieved results up to 20 m in range. The addition of the SeaShot Imager Stills Camera and the SeaShot LED provides synchronised laser and stills camera operation for an even higher degree of detail during survey campaigns. Additionally, the ULS-500 PRO comes standard with a 4000 m depth rating. With the best accuracy in the industry and real time data acquisition, the ULS-500 PRO will replace the ULS-500 as the accepted technological norm for high resolution subsea survey.

Prior to this public launch, the ULS-500 PRO delivered remarkable scans to a select set of organisations including DOF Subsea, DeepOcean, NOAA, EIVA, Parks Canada, GE Oil & Gas as well as US Army Corps of Engineers. While working at NOAA, Kevin Tomanka, Senior Hydrographer and Data Processor at OARS, noted that “at standard survey speeds of 4 - 5 knots the ULS-500 PRO captured over 6500 points per square metre.” Tomanka stated that the “ULS-500 PRO sets a new benchmark for data density and quality. It is clear that laser point data combined with digital still images is the new standard for high resolution seabed mapping.”

Read the article online at: https://www.worldpipelines.com/product-news/16032017/2g-robotics-to-publically-launch-underwater-laser-scanner/

47% of investors supported a shareholder resolution asking Caterpillar to disclose whether and how the company is aligning its climate policies and performance with the progress indicators laid out in the Climate Action 100+ Net-Zero Company Benchmark.