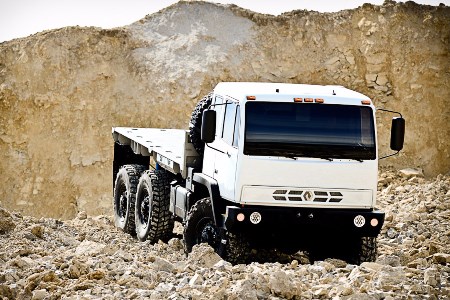 As the newest commercial truck chassis provider, Acela is set to disrupt a market that hasn't seen new competition in decades. The company's core innovation is its development of a proprietary process of resetting US Army Family of medium tactical vehicles (FMTVs) to a near zero mile condition. The trucks are then sold into commercial markets including oil and gas, mining, pipeline construction and forestry, where current chassis simply cannot perform.

"When looking at mining, oil and gas and utilities operations, a more durable, capable and extreme truck has been in high demand for years," states Acela Truck Company President and CEO, David Ronsen. "We're here to fill that niche need and help our customers improve productivity while cutting their capital costs with the most capable truck chassis they've ever had."

Acela embarked on developing its powerful line of vehicles after several of their Canadian oilsands clients approached Ronsen explaining that there wasn't a truck that could handle the extreme, rugged environments of the Canadian oilsands with a long lifecycle and a cost-effective price point. Versions of the Acela Monterra have proven themselves in the mines for over seven years with a 96% documented uptime.

Acela Truck Company will join Canadian truck body builder, Brutus Truck Bodies, at the Global Petroleum Show. "The Monterra is undoubtedly the most extreme duty truck ever introduced into the Canadian Market," notes Brutus CEO, Curtis Turchak. "We are proud to be part of the official launch of Acela. We're confident that this line of trucks will be the number-one choice of chassis in the Canadian oilsands and related markets."

FMTVs were originally developed for the US Army to withstand the harshest conditions during combat, and have achieved the US Army's coveted "ultra-reliable" status for 17 years running. Acela Truck Company's proprietary reset process restores FMTVs for commercial use. The company's first model of trucks – the Monterra – boasts the industry's most robust and dependable design features, including drivetrains, frames, axles, suspensions, tires and other components specially designed to withstand the rigors of the most extreme environments. The four pillars of the Acela Truck Advantage are: total cost of ownership, ease of maintenance, on or off-highway capability and a one year warranty.

Read the article online at: https://www.worldpipelines.com/product-news/14062017/acela-truck-company-showcases-diverse-truck-line-at-gps-2017/