Pipelines that transport oil and gas over long distances often pass through rough environments. They are exposed to temperature variations and other weather influences. To ensure that the distribution of liquids and gases functions smoothly and that the medium does not escape, the technology must meet the highest quality standards. AS-Schneider's Taurus Series Double Block & Bleed Piping Ball Valves offer a solution that scores with its sealing properties and at the same time ensures optimal ventilation. 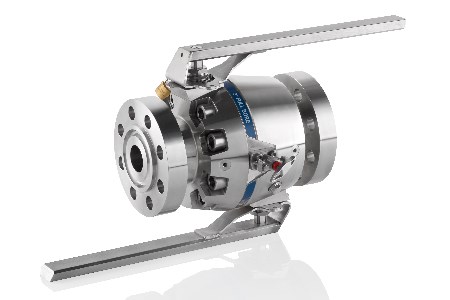 In pipelines, very diverse media with varying properties can be transported. The problem: many of these media expand when heated, like, for example, liquefied natural gas. If the medium cannot expand because it is trapped in a fixed space, the pressure increases instead. If the liquefied natural gas is spatially blocked at -161°C and 1 bar pressure and the temperature is allowed to rise to room temperature, the pressure increases to 1895 bar. Therefore, it must be ensured that areas, in which the medium can be blocked, are protected against a pressure overload. The decisive factor is: according to the standard, the overpressure must not escape into the atmosphere, but must be released into the process line. Both the Double Block & Bleed Piping Ball Valves of the Taurus Series and the ‘Process-to-Instrument’ ball valves of the VariAS-Block Series meet these requirements as a standard feature. They consist of two block ball valves and a bleed valve (Double Block and Bleed). Depending on the version, they can withstand pressures up to 420 bar.

Among other things, AS-Schneider's solutions are designed for the two diverging standards EEMUA 182 and SHELL MESC SPE 77/170. The latter requires venting through a 3 mm borehole in the ball in the direction of the process. This technique is used in the VariAS-Block Series.

The ball valves are available with Floating Ball Design. The ball seats are fixed and the ball can move in closed position in direction of flow. When the valve closes, the ball also rotates and the liquid or gas enters in and around the ball. Without the 3 mm borehole, the medium would be blocked between the two ball seats which would lead to a significant increase in pressure when heated. The medium can simply expand to the process when heated without the pressure rising through the 3 mm connection borehole to the process side.

On top of that, there are ball valves with Trunnion Ball Design. In this application, the balls are fixed in the direction of flow but the valve seats can move. Figure 1: There are ball valves with Trunnion Ball Design. In this application the balls are fixed in the direction of flow but the valve seats can move.

With the EEMUA 182 standard, venting must not take place via a borehole in the ball, but must be automatic. For this purpose, for example, self-venting valve seats are used, which are pressed against the ball by means of spring force. The medium flows into the space around the ball. Here, too, the medium is initially blocked between the two ball seats and when heated, the pressure increases. In this case, however, due to the rising pressure, the valve seats are pushed away from the ball against the spring force, whereby the pressure can escape. The advantage over the venting with the 3 mm borehole:

The solution works bidirectionally, that is, it seals in both directions. This solution also works very reliably. Figure 2: To ensure that the distribution of liquids and gases functions smoothly and that the medium does not escape, the technology must meet the highest quality standards. This also applies to the valves and ball valves that are used during drainage or transfer.

There are also self-venting ball seats designed according to the above-described Floating Ball principle, which can be bidirectionally sealed. Here, the venting of the trapped pressure takes place around the valve seat. However, the pressure at which the medium begins to flow past the valve seats cannot be accurately predicted here, since it depends greatly on the manufacturing tolerances. Therefore, solutions with the 3 mm borehole in the ball are, in many cases, the more suitable option, as they work very reliably and are wear-resistant despite the borehole.

Read the article online at: https://www.worldpipelines.com/product-news/08052018/double-block-and-bleed-piping-ball-valves-of-the-new-generation/

Mooted US$100 oil unlikely given abundance of OPEC capacity.