Transneft Diascan has upgraded an ultrasonic inspection tool for pipelines with diameters from 40 - 48 in. After the modernisation, the tool was marked 40 UZD.04 which stands for the 4th generation of ultrasonic defectoscopes. 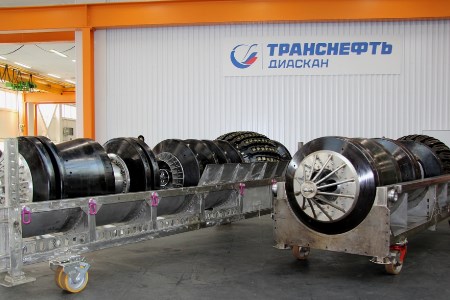 The main purpose of upgrading the ultrasonic inspection tool was to improve the efficiency of detecting defects located in dents. The upgraded defectoscope is equipped with a new carrier of WM sensors, which has increased slide flexibility and adaptive slats with sensors on movable suspensions. This enabled the sensors to touch the pipeline’s surface even when the tool is going through a deformed section, over a dent or a buckle, which allows detecting and measuring defects such as scratch marks, metal loss and lamination in dents and buckles. At the same time, the number of WM sensors on the new carrier was increased by 1.8 times, which reduces the distance between the sensors circumferentially.

The ultrasonic WM defectoscope of the 4th generation with increased resolution is equipped with the adaptive sensors carrier that guarantees their optimal positioning on the pipe’s surface, including in areas with geometric defects. The tool provides the following advantages:

The device was upgraded over a period from January 2016 to August 2018. Preliminary and acceptance tests were performed at Transneft Diascan’s testing facility as well as at a section of the BTS-2 oil pipeline operated by Transneft Baltic. The tool was tested to confirm its resistance to various climatic (temperatures from -40°C to 50°C) and mechanical factors. The tests confirmed the compliance of the defect detection and measurement efficiency within the required specifications.

Read the article online at: https://www.worldpipelines.com/product-news/03102018/transneft-diascan-commissions-upgraded-pipeline-inspection-tool/