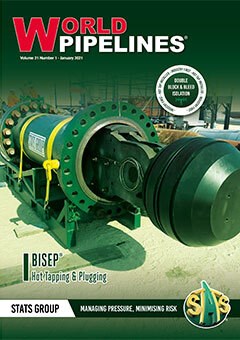 In the second half of last year I commissioned a regional report focusing on pipelines in the US and the piece appears in this issue, starting on p.12 (‘Looking beyond the global pandemic’). When our longstanding freelance writer Gordon Cope submitted the article at the beginning of November, he included analysis based on two scenarios: one entitled ‘Trump wins’, another called ‘Biden wins’. The Biden section appears in print in this issue, but I thought our readers might be interested in reading the alternate ending.

“Trump wins. Throughout the first term of his administration, President Trump championed the oil and gas sector, opening up federal and Arctic lands to exploration and development, and reversing Obama administration decisions such as the cancellation of the Keystone XL crude pipeline. He also authorised rollbacks in regulatory red tape and the states’ ability to use jurisdictional powers (such as the CWA) to delay or veto interstate pipeline projects.On the eve of the election, President Trump signed the ‘Memorandum on Protecting Jobs, Economic Opportunities, and National Security for All Americans,’ mandating the Secretary of Energy to prepare a report on “the economic impacts of prohibiting, or sharply restricting, the use of hydraulic fracturing and other technologies.” The move was seen as an attempt to highlight the potential negative impacts of Democratic candidate Biden’s policies of banning fracking on federal lands. Trump’s re-election will reinforce White House efforts to relieve the oil and gas sector of many of the expenses related to climate change responsibilities.”

Let’s unpack that in light of the election result. There will be no such championing from Biden. In general, his administration’s policies will work towards curtailing the environmental impacts of burning fossil fuels and many predict that he plans to do this by limiting domestic oil and gas production, while raising costs. Permits may be harder to come by and subsidies and tax breaks are certainly under threat.

Biden has previously pledged to cancel a key permit for the Keystone XL pipeline, but many on all sides of the political spectrum support the project and Biden has a reputation as a deal-maker.

Biden will no doubt reduce incentives for the fracking industry, but a flat-out ban is unlikely and fracking activity will migrate to private and state-owned land. As the Council on Foreign Relations puts it: “Since natural gas is up to 40% more carbon efficient than oil or coal, Biden argues that fracking is still a step forward until renewables are more widely adopted. As Vice President and as a Presidential candidate, he supported the Obama administration’s ‘all of the above’ energy strategy, which helped spur the fracking boom.”1

A crackdown on the emissions-heavy coal industry may boost the gas sector, as Biden looks to move away from coal for electricity generation.

Finally, Biden will not be blind to the contribution that the fossil fuel industry makes to the US economy, not to mention the importance of national energy security.

Oil and gas companies have been tackling the issue of carbon dioxide emissions for years, and the big ones will hope to work with the new administration on creating realistic and responsible climate policies for the future.