Electrical Heat Tracing (EHT) cables were initially developed in the 1930s as a proposed alternative to steam heating which had been adopted since the early 1900s. Although EHT cable wasn’t initially suitable for use with heavy machinery, due to its tendency to crack under high temperatures, technological advances have meant that we are now able to install EHT cable in even the most extreme environments. 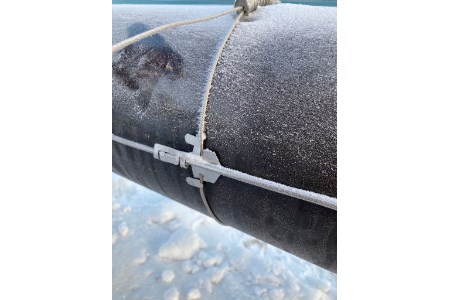 Thousands of kilometres of EHT cable are installed globally each year with the requirement for installations set to continue to rise as investment continues. This is especially true when considering that the scale of pipelines has increased massively over the last 25 years with both average diameters and lengths rising – thus increasing the overall capacity on offer (an increase of 82% since 1996). This, in turn, will inevitably increase the requirement for EHT cable installations.

Whilst millions of dollars have been invested in improving the performance of EHT cables, somewhat neglected has been the importance of innovation whilst developing methods of attaching cables to pipelines. Traditional methods of attachment include the use of ‘off-the-shelf’ parts such as banding or tie wire, which are installed at 300 mm intervals to ensure that the cable remains in close proximity to the pipe in an attempt to maximise the efficiency of heat transfer.

The industry’s admirable passion for maximising the performance of the overall system has, until now, been centred upon improving the technology of the cable itself. This is despite the fact that the chosen attachment method can play a pivotal role in ensuring that any common failure modes are avoided, thus allowing costly time-consuming delays to be minimised and cable lifespans to be maximised.

The problems with tradition

Whilst traditional methods of attachment could appear to have withstood the test of time, they are certainly not without problems. There are several issues which arise if careful consideration into a suitable attachment method isn’t undertaken. The potential issues, which are outlined below, only magnify the importance of selecting the right attachment materials for any EHT cable installation.

One of the main issues for any product which is to be installed in a potentially hazardous environment, and a consideration which should always be at the forefront of all thinking, is the potential for health and safety issues.

Traditional attachment methods are notorious for their tendency to cause cuts to the hands and wrists due to their sharp-edged nature, despite the care which is taken to provide suitable PPE. They also often present problems such as repetitive strain injury (RSI) due to the nature of their installation. In fact, accidents are so frequent in oil and gas environments that some facilities have now begun referring to the number of ‘hours’ since last incident rather than the previously used number of ‘days’ since last incident.

As well as the obvious and potentially devastating human costs, the financial costs of health and safety issues cannot be underestimated.

Read the article online at: https://www.worldpipelines.com/equipment-and-safety/21042022/avoiding-cable-failures/