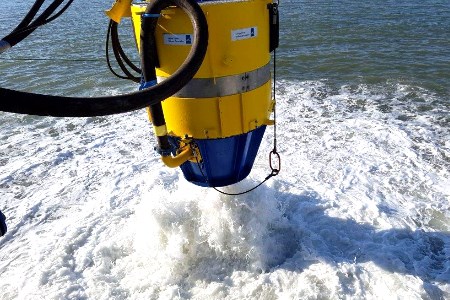 Moving away from customary designs which place jets at the side of M/CFE tools, JFSE’s innovative technology dramatically reduces velocity degradation. JFSE’s excavators will now be capable of cutting soils with shear strengths up to double that which any other M/CFE system can realise. JFSE is the only M/CFE provider that can place its jets centrally.

The jets will markedly improve efficiency where additional tooling was required to complete a project due to the density of the soils thereby helping to lower costs for clients. They will also decrease operational time on a number of excavations.

The development of this new technology follows the recent successful launch of the MultiROV, an exclusive ROV system which provides new levels of controllability and productivity, as well as the Twin T8000 which has the highest volume output of any subsea excavator in the world.

Commenting on this latest M/CFE innovation, Graham Murdoch, Technical Director at JFSE, said: “We are committed to using our world-leading knowledge and expertise to continue to lead innovation in the sector. Our developments are all designed to bring very real, tangible benefits to our clients.

“Continuously evolving our service with advancements such as the centrally located jetting system further cements our position as the leading and most versatile M/CFE provider in an ever-changing global market.

“Discussions with our clients identified this enhancement would offer significant benefits. We undertook a detailed computational fluid dynamics exercise to fully understand the effects of this setup and the results were impressive. We can now cut soils with shear strengths almost double that which any other M/CFE system can realise.”

The jets are now being fitted to JFSE tools which are stationed at strategic hubs in the UK, UAE, Singapore, Venezuela, USA, Brazil, China and Mexico. JFSE is the only M/CFE company capable of working simultaneously on multiple projects worldwide and, as part of the James Fisher group, it has access to bases and sister company expertise in more than 40 countries. To date, the highly experienced management and engineering teams are responsible for the successful completion of more than 460 projects.

JFSE’s fleet of 30 equipment spreads provides a non-contact form of excavation that eliminates the risks associated with other excavation methods. Further enhancing their capabilities, the tools have the additional benefit of real time sonar imaging which enables precision excavation. The tools are used for applications including pipeline and cable trenching, deburial, rock dump dispersal and seabed clearance and preparations. The M/CFE spreads are ideal for moving materials such as sand, silt and mud, drill cuttings, clay and rock dump.

Read the article online at: https://www.worldpipelines.com/equipment-and-safety/19072017/jfse-launches-patented-revolutionary-jetting-technology/