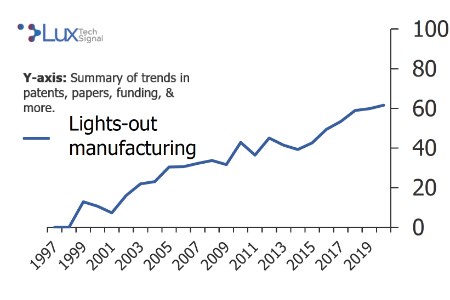 Lights-out manufacturing is fully automated and requires no human presence, so that lights and even ventilation can be shut off, hence the term ‘lights-out’. While lights-out manufacturing sounds futuristic, the concept has been circulating for a couple of decades now. In fact, many organisations, including IBM, GE, Fanuc, and Philips, have operated several forms of lights-out factories.

During the past five years, investors have shown steadily rising interest and activity in lights-out manufacturing, which we can see using Lux Research’s internal tools that analyse patents, publications, and funding. Ideas developed in the late 20th century around lights-out manufacturing are now resurgent because of current advances like advanced robotics, computer vision, industrial IoT, machine learning algorithms, and improved computing.

Similarly, funding for robotics and automation in manufacturing has also increased significantly since 2015. While most of the funding is in the form of venture capital investments in emerging startups, public companies have also raised millions in post-IPO funding. Besides technical enablement, there are non-technical factors responsible for the growing demand for lights-out manufacturing.

Read the article online at: https://www.worldpipelines.com/equipment-and-safety/12052022/the-path-to-lights-out-manufacturing/