PG&E’s President of Gas Nick Stavropoulos called on the US natural gas industry to increase contractor education and outreach about the significant safety risks associated with reckless digging and to step up enforcement of companies that don’t follow the law. In 2015, excavation companies struck natural gas pipelines 1900 times in Pacific Gas and Electric Company’s (PG&E) 70 000 square mile service area. Many of these dig-ins resulted in completely preventable gas leaks that impact the safety of 16 million Californians.

“For the sake of public safety, we must do everything we can to reduce dig-ins on critical infrastructure. This means continued education and when necessary, taking legal action against repeat offenders. My personal goal, and our company goal, is to eliminate dig-ins everywhere,” Stavropoulos said during his remarks during the Common Ground Alliance’s (CGA) Excavation Safety Conference.

As part of a national effort to raise awareness of this critical issue, Stavropoulos addressed hundreds of US natural gas and liquid pipeline operators, and other underground utility and sewer companies, about the importance of safe-digging practices on Wednesday, 9 March at the Common Ground Alliance conference in Las Vegas. He spoke about PG&E’s aggressive and proactive approach toward eliminating dig-ins through public awareness, education and when necessary, enforcement. During the conference, PG&E’s Senior Vice President of Gas Operations Jesus Soto was presented with the seventh annual CGA President's Corporate Excellence Award. The President's Award is given annually to an organisation that has shown leadership and innovation in support of damage prevention during the previous year. According to CGA, PG&E was awarded for its overall leadership in damage prevention.

Stavropoulos noted that PG&E’s new proactive contractor and customer education efforts led to a 13% reduction in the number of dig-ins from 2014 to 2015. He credits PG&E’s new Dig-in Reduction Team (DiRT), aerial surveillance of unreported excavation, and the 811 Employee Ambassador Program as key contributors to the overall decline in dig-ins.

While a majority of the 1900 dig-ins in 2015 occurred on PG&E’s gas distribution lines, two third party transmission system strikes led to fatalities in the communities of Fresno and Bakersfield, California. Both of these incidents were preventable had the excavation companies followed California digging laws.

Stavropoulos underscored the danger posed to contractors that don’t comply with state law. “It’s not just about damaging our facilities, it’s about whether you may or may not come home to your family at the end of the day. That’s a powerful message,” he said.

Read the article online at: https://www.worldpipelines.com/equipment-and-safety/10032016/we-must-eliminate-dig-ins-everywhere/ 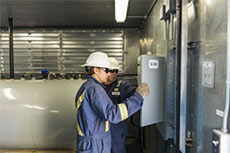 “These amendments are about having the best safety standards in place, while clarifying the regulatory environment for industry,” stated Minister of Natural Gas Development, Rich Coleman.

The National Energy Board has issued a safety order to Plains Midstream Canada ULC with regards to its Windsor Sarnia pipeline.

Plains All American Pipeline says the broken section of a pipeline that spilled oil along the California Coast can be removed for investigation.