Balltec established a close working relationship with Statoil whilst working on a new lifting system for the Åsgard subsea gas compression project. It was during this time that Statoil asked Balltec to investigate the possibility of designing and manufacturing a subsea plug launcher to their unique specifications.

The plug launcher was built on technology used in Balltec’s recently developed flangeless subsea pig launcher, a subsea tool used to deploy a pig into a pipeline without the need for a bolted flange connection or diver intervention. The existing technology was significantly re-designed to accommodate a larger smart plug of 4.5 m in length with a mass of 1500 kg. The plug launcher gripping mechanism was built to withstand pressure of up to 120 bar from within the pipeline.

Jon Jackson, Balltec Engineering Manager said: “This is a unique piece of subsea equipment. The subsea plug launcher is flangeless and allows the insertion of plugs without any existing infrastructure by gripping and sealing the end of a cut pipe. The plug can be launched via a simple hydraulic system and operated with minimum ROV intervention. This allowed our client to have no production loss during tie-in.”

The whole project was delivered to Technip, the installation contractor, within an onerous time frame which included all FAT procedures and Statoil technical approval. The plug launcher was successfully deployed and used in the Åsgard field in August 2015.

Gunnar Paulson, Senior Technical Advisor at Statoil said: “The Balltec Plug Launcher was used for launching a Smart Plug into a producing 20 in. pipeline at the Åsgard field in Norway. The objective was to isolate the gas producing part of the pipeline from the water filled section at the end, facilitating installation of a pipeline end module while the main part of the pipeline was in normal production. The technology went through an extensive development and testing process before the launcher was qualified by Statoil for operation on a live pipeline. Several parties contributed to a safe and successful launching operation this summer. Statoil would like to thank Balltec for their efficient design, fabrication and testing of the Plug Launcher.”

Read the article online at: https://www.worldpipelines.com/equipment-and-safety/08022016/balltec-provides-technology-for-statoils-pipeline-project/ 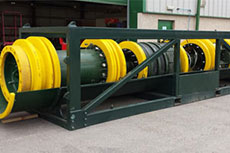 STATS Group has announced that the company successfully isolated a client’s key export pipeline, without the use of hot tap tees.