ABB has won a large contract for the 1850 km Trans-Anatolian natural gas pipeline (TANAP) to bring Azerbaijan’s natural gas directly to Europe. ABB will deliver the control infrastructure to contribute to safe, secure and reliable operation of the pipeline throughout its lifetime. ABB signed the contract with TANAP.

The US$11 billion pipeline will interconnect with two others: the South Caucasus at Turkey’s border with Georgia and the Trans Adriatic at its border with Greece. The gas will come from the Shah Deniz II field in the Caspian Sea and it will enter the European network in Italy. It will cross the whole of Turkey, with TANAP forming the central section of the US$45 billion Southern Gas Corridor, which will be part of Europe’s future strategic energy infrastructure.

ABB will deliver the control system, telecommunications, pipeline monitoring, security systems including fiber- optic cables to transmit data along the pipelines. The pipeline will be controlled and automated by ABB’s world-leading System 800xA process automation system. The software solutions will integrate the supervisory control and data acquisition (SCADA) systems and the telecommunications that control the gas flows, detect leakages or intrusions and make closed circuit television (CCTV) coverage available for safety and security purposes.

ABB has a proven track record delivering software solutions to many similar projects, including the South Caucasus link and the Baku Tiblisi Ceyhan (BTC) line connecting Azerbaijan with the Mediterranean. Altogether, more than 4,500km of pipeline in the region will be controlled by ABB’s System 800xA infrastructure, safeguarding approximately 5% of Europe’s annual gas demand.

TANAP is a special-purpose company with SOCAR of Azerbaijan, BOTAS of Turkey and BP as shareholders. ABB’s delivery will be a business-led collaboration between ABB in Turkey and ABB in the United Kingdom.

Read the article online at: https://www.worldpipelines.com/contracts-and-tenders/16122015/abb-contract-win-for-tanap/ 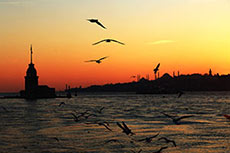 TANAP is Turkey's priority rather than Russia's last pipeline proposal.

Turkish officials have revealed that an agreement over the Trans-Anatolian natural gas pipeline project (TANAP) is to be signed next week by the governments of Turkey and Azerbaijan.