QS Energy Inc. – a developer of integrated technology solutions for the energy industry – has recently announced that it is in discussions with two large crude oil producing nations in the Middle East to provide deployment strategies for the QS Energy’s AOT viscosity/pressure drop reduction technology.

QS Energy will be testing customer-provided crude oil samples and performing feasibility studies to determine the potential benefits of AOT installations on a specific number of pumping stations on several pipeline systems.

"There are a number of large infrastructure modernisation programmes underway in the Middle East to increase crude oil output and significantly expand the pipeline systems that transport upstream production to refineries and marine offloading facilities," stated Greggory Bigger, Chairman and CEO of QS Energy.

"Our objective is to forecast how the use of AOT technology might improve the efficiencies and OPEX performance of … pipeline systems," Mr Bigger added.

Opportunities stem from upstream projects undertaken by two of the Middle East's most prominent oil producers to step up production and improve delivery to market. Recently, many oil-producing nations, including Saudi Arabia, Iran and Iraq, have announced ambitious plans to increase output and streamline their ability to transport production to refineries and seaports for delivery to foreign markets.

In 1Q and 2Q15, crude oil samples from a major Middle East oil producer were provided to Temple University for laboratory testing to simulate the potential benefits of AOT on a commercial pipeline. The test results demonstrated viscosity reductions of 20% to 35% using AOT technology. As a result of these performance benchmarks, QS Energy has moved to discussions with this Middle Eastern entity, regarding a project-specific AOT viscosity/pressure drop reduction system. QS Energy has also provided a detailed benefit analysis case study for their review and provided recommendations for outfitting a certain pipeline with the AOT equipment.

"Based on our continuing interactions with these organisations, we believe that they are dedicated to implementing strategic, multi-pronged engineering programmes to improve the existing pipeline infrastructure and deliver hydrocarbons more efficiently and cost-effectively to global markets," Mr Bigger stated.

Read the article online at: https://www.worldpipelines.com/contracts-and-tenders/16082016/qs-energy-aot-technology-interests-middle-eastern-oil-producers/ 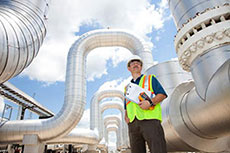 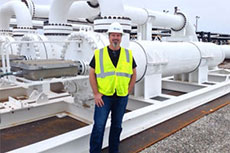