TransCanada Corporation (TransCanada) has announced that its joint venture with IEnova, Infraestructura Marina del Golfo (IMG), has been chosen to build, own and operate the US$2.1 billion Sur de Texas-Tuxpan natural gas pipeline in Mexico. The project will be supported by a 25 year natural gas transportation service contract for 2.6 billion ft3/d with the Comisión Federal de Electricidad (CFE), Mexico's state-owned power company.

"We are extremely pleased to further our growth plans in Mexico with one of the most important natural gas infrastructure projects for that country's future," said Russ Girling, TransCanada's President and Chief Executive Officer. "This new project brings our footprint of existing assets and projects in development in Mexico to more than US$5 billion, all underpinned by 25 year agreements with Mexico's state power company."

The bid for the Sur de Texas-Tuxpan project was presented in partnership with IEnova, a subsidiary of Sempra Energy. TransCanada will develop, operate and own 60% of this project, with IEnova owning 40% of it.

TransCanada expects to invest approximately US$1.3 billion in the partnership to construct the 42 in. dia., approximately 800 km (497 mile) pipeline and anticipates an in-service date of late 2018. The pipeline will begin offshore in the Gulf of Mexico, at the border point near Brownsville, Texas and end in Tuxpan, in the state of Veracruz.

In addition to a connection with CENAGAS's pipeline system in Altamira, the project will interconnect with TransCanada's Tamazunchale and Tuxpan-Tula pipelines as well as with other transporters in the region.

The Sur de Texas-Tuxpan pipeline is the most recent addition to TransCanada's expanding portfolio in Mexico. In the last eight months, TransCanada was awarded the Tuxpan-Tula and the Tula-Villa de Reyes pipelines. Construction activities for these two pipelines are already in progress with the expectation of achieving in-service dates of 2018.

Read the article online at: https://www.worldpipelines.com/contracts-and-tenders/14062016/sur-de-texas-tuxpan-pipeline-construction-contract/ 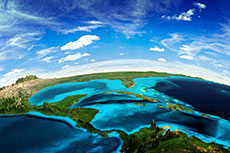 The National Energy Board has issued a board order to TransCanada to ensure environmental protection and mitigation measures continue on the Keystone XL pipeline project.

The project now has approval for construction and operation of the proposed pipeline and related facilities.