Harkand provided a full suite of services including saturation and surface diving, ROV, survey, inspection as well as project management and engineering for the execution of the campaign.

This was also the first project for the new HRF built by Harkand in the Gulf of Mexico in August 2015. The HRF was set up in Chaguaramas on the North West peninsula of Trinidad for the campaign.

John Reed, Harkand chief executive officer said: “Securing this contract with BP Trinidad and Tobago was a significant win in the region. The work involved an array of specialist subsea services and engineering, cementing our track record in the area.”

Reed added: “This work followed successful campaigns by both the Houston and Aberdeen operation bases in the Caribbean during 2014 and 2015 for major global oil and gas operators. We are extremely pleased to add BPTT to our client base in the area.”

Mathieu Guillemin, Non-Executive Director of Harkand and Managing dDirector at Oaktree Capital Management said: “Harkand’s collaboration between their global centres during the current market environment is key in successful execution of world class projects. Oaktree continues to demonstrate its support for the financial stability of Harkand, in support of the company’s strategic priorities.”

Read the article online at: https://www.worldpipelines.com/contracts-and-tenders/10022016/harkand-completes-irm-campaign-for-bp-in-caribbean/ 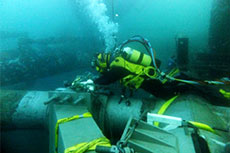 Harkand has bolstered its inspection services with the appointment of a new inspection manager based in its Aberdeen office.