OptaSense, a QinetiQ company, and its partner Optilan, a telecommunications systems integrator, have been awarded the combined leak detection and security package from ABB, the engineering, procurement and construction prime contractor for the delivery of the control infrastructure for the Trans-Anatolian Natural Gas Pipeline (TANAP).

The contract, in excess of US$30 million split evenly with Optilan, was awarded at the start of the year and now enters the equipment delivery phase, marks a significant milestone for OptaSense, the global leader in distributed acoustic sensing (DAS) and Optilan, an international communications and security systems provider. This will be the world’s largest fibre distributed sensing project, protecting and monitoring more than 1850 km of pipeline, including perimeter security for all facilities.

The TANAP natural gas pipeline runs from Azerbaijan through Georgia and Turkey to Europe. The project is of strategic importance for the region, as it will enable the first Azerbaijani gas exports to Europe, while strengthening the role of Turkey as a regional energy hub. Construction of the pipeline began in 2015 and is scheduled to be completed in 2018, with expected costs in the region of US$10 - 11 billion.

Magnus McEwen-King, Executive Director at OptaSense commented: “This project marks a significant turning point in the adoption of fibre sensing globally with delivery of security and leak detection from a single fibre system. This approach will enable us to demonstrate superior technical performance and value for money. With our partners ABB and Optilan we look forward to helping TANAP use the OptaSense technology to deliver the highest levels of pipeline availability and reduce the cost of asset ownership.”

Bal Kler, Executive Director at Optilan said: “We are pleased to be partnering once again with the world’s leading fibre sensing company to deliver the world’s largest pipeline monitoring project. Implementation of this project for TANAP will deliver total security and monitoring over the entire pipeline length and follows on from other successful security projects in Turkey.”

OptaSense’s award-winning integrated DAS solution works across multiple functions via a single fibre optic cable that effectively ‘listens’ to the pipeline in order to provide detailed data about its current status. Any changes to the condition of the pipe are fed back through an interrogator unit in real time, allowing users to identify and address issues early and maintain the highest level of pipeline integrity and product throughput.

Leak and intrusion detection are vital to maintaining pipeline integrity and production maximisation in the oil and gas industry. In 2015, an attack on the Kirkuk-Ceyhan pipeline, which exports crude from Iraq to Turkey, halted operations resulting in significant repairs and thousands of barrels per day in lost deliverables.

Read the article online at: https://www.worldpipelines.com/contracts-and-tenders/07062016/leak-detection-and-security-contract-awarded-for-tanap-project/ 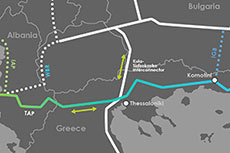 The European Bank for Reconstruction and Development is considering financing up to €1.5 billion for the TAP pipeline project. 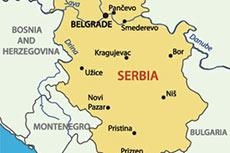 Serbia is under pressure to liberalise its energy markets before EU membership is granted. 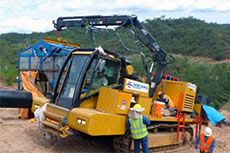 Political and economic issues are complicating the development of new gas pipelines to serve Europe, as Gordon Cope explains.