Ian Bradshaw, Managing Director at TAP, said: “I want to thank all those companies who participated in this tendering round. Following a rigorous evaluation and bidding process, Siemens was selected for their expertise, know-how and robust safety track record in providing highly reliable gas turbine turbo compressor units, which are an integral piece of our pipeline.”

Siemens AG is one of the world’s largest producers of energy-efficient, resource-saving technologies. In infrastructure and industry solutions the company plays a pioneering role. As of September 30, 2014, Siemens had around 343,000 employees in more than 200 countries.

In April 2015, TAP awarded its first major contract, for the construction of access roads and bridges in Albania. In July 2015, TAP completed the tendering process for the supply of large diameter ball valves and actuators. For further information on TAP’s procurement process and the contracts that it plans to award, click here.

Read the article online at: https://www.worldpipelines.com/contracts-and-tenders/02092015/tap-awards-compressors-contract/ 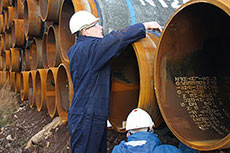 Trans Adriatic Pipeline has issued its next contract notice in the Official Journal of the EU Gazette.