Permian oil production growth is set to outpace OPEC heavyweight, Iraq this year and next as demand for oil surges on historically tight supply, Rystad Energy research shows. Total oil output from the Permian, including both conventional and unconventional, is forecast to grow by almost 1 million bpd this year, jumping from 4.7 million to 5.6 million bpd, before climbing further to around 6.5 million bpd in 2023. By contrast, Iraq’s output will grow by some 600 000 bpd in 2022, and 400 000 in 2023. 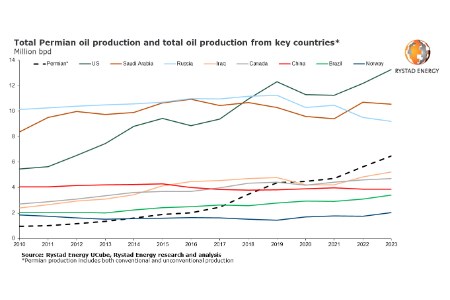 In 2010, the Permian only produced some 1 million bpd, dwarfed by oil-producing countries such as Norway, Brazil and Canada. As a whole, the US produced less than 6 million bpd in 2010. However, in the years since, output has surged with the Permian becoming a critical driver of US production growth. The basin now boasts higher production than any country, besides Russia and Saudi Arabia.

In 2023, the Permian is on track to account for about half of all US oil output of 13.2 million bpd, up from about 42% in 2021. While the Permian has produced more oil per year than Iraq since 2020, the gap between the two countries will widen in the next two years. Illustrating the Permian’s significant growth further, total oil production in the basin will outstrip the combined output of Norway and Brazil in 2022, which will together produce about 4.8 million bpd.

“The Permian has become the hot spot for US oil production thanks to significant resources, low breakeven costs and high oil content. This trend is only likely to continue, as global oil markets struggle with supply constraints and the demand for oil shows little sign of easing,” says Espen Erlingsen, Head of Upstream Research at Rystad Energy.

However, it is not just the Permian that is forecast to grow production this year, with increased output expected across all US shale basins. Total growth from key plays is estimated to be more than 1 million bpd, the highest level seen since 2019. The Permian Delaware is expected to see the most growth at 500 000 bpd, while the Permian Midland will see an almost 450 000 bpd increase. After experiencing production losses in 2021, the Bakken, Eagle Ford and DJ Basin are expected to post modest growth. With continued growth expected into 2023, total oil production for these five plays may approach 9 million bpd, closing in on Saudi Arabia’s total oil production of around 9.5 million bpd in 2021.

Considering the investments each basin has attracted in recent years, it is clear to see why the Permian is growing at a quicker rate than its counterparts. The US tight oil industry pivoted towards the Permian, and eased investments in the Bakken and Eagle Ford plays between 2016 and 2018. Since 2016, total investments in the Permian Midland have jumped from US$10.3 billion to an anticipated US$23.5 billion this year. Permian Delaware investments have followed a similar path, rising from US$7.7 billion in 2016 to a forecast US$25 billion this year. By contrast, investments in other key tight oil plays have remained relatively flat and have failed to recover since the pandemic caused a significant reduction in capital expenditure. This lack of investment is a primary reason why production is not growing as fast in these areas. However, investments are expected to rise across all plays this year as production increases, with the Bakken growing by about 40% over last year’s investment total.

Read the article online at: https://www.worldpipelines.com/business-news/31052022/permian-to-the-rescue/