A combined value of US$91.9 billion in mergers and acquisitions (M&A) was announced in 3Q18. This was an increase of 21% from the US$75.9 billion in M&A deals announced in the previous quarter. The number of M&A deals decreased by 20% from 102 in 2Q18 to 82 in 3Q18, according to GlobalData, a leading data and analytics company. 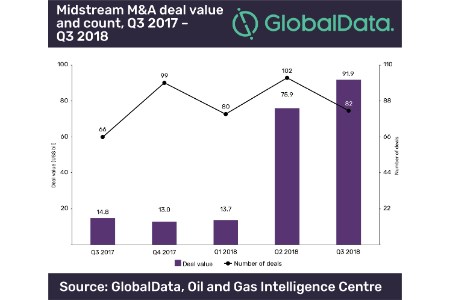 Energy Transfer Equity’s (ETE) agreement to acquire the remaining stake in Energy Transfer Partners (ETP) for a purchase consideration of approximately US$60.4 billion was the top deal registered in 3Q18. Another landmark deal that was recorded in 3Q18 was Enbridge’s agreement to acquire all of the outstanding public Class A common units of Enbridge Energy Partners, all of the public outstanding shares of Enbridge Energy Management, and all of the issued and outstanding shares of Enbridge Income Fund Holdings, for a purchase consideration of US$7.1 billion.

Read the article online at: https://www.worldpipelines.com/business-news/29102018/midstream-mergers-and-acquisitions-for-3q18/