Enteq Technologies (Enteq), the energy services technology and equipment supplier, has today opened its new technology centre in Andoversford, near Cheltenham, in the UK. 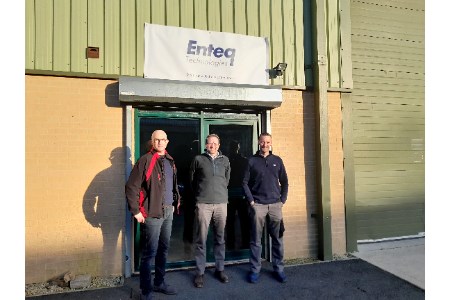 The centre’s launch follows successful downhole and system testing of Enteq Technologies’ new SABER Tool, an innovative alternative to traditional rotary steerable systems (RSS) for directional drilling. Housing a team of engineers, the dedicated technology centre will allow the company to continue development of the tool ahead of full commercialisation in 2022.

Andrew Law, Enteq CEO comments on the opening: “Once the SABER Tool outperformed our expectations in initial surface and downhole testing, we decided it was time to push forward with our plans for a new UK technology centre to support the tool’s further commercial development.

“Though our ambitions for SABER are global, the UK is our home as a company and an excellent base from which to conduct business worldwide, with a wealth of respected and relevant engineering talent. The area is known within the industry for being a hub of expertise for RSS development, so it was logical that this should be the location of our UK technology centre.”

The centre will be started up by Marcus Quitsch, who was recently employed as the company’s Reliability Manager. Marcus brings nearly two decades of experience from companies including Baker Hughes and Weatherford.

Neil Bird, VP Advanced Drilling Systems at Enteq adds: “We’re delighted to welcome Marcus to the team. His track record and knowledge are exactly the calibre that we strive for at Enteq Technologies and we know that he’s going to make a wonderful addition to our management team.

“I am looking forward to bringing the SABER Tool to market as a fully commercial directional drilling system in 2022 underpinned by this new appointment and facility expansion.”

The SABER Tool, is an evolution of the proof of concept, tested by Shell and licensed to Enteq, representing a step-change in directional drilling technology. The Enteq team, which has expanded rapidly in response to its product development and global growth ambitions, has re-engineered the concept resulting in a mechanically simple, plain collar and compact design that promises excellent control and new levels of reliability.

Interested parties can sign up to Enteq Technologies’ upcoming webinar series for an update on the SABER Tool’s downhole testing to date on 1 March.

Read the article online at: https://www.worldpipelines.com/business-news/28022022/enteq-technologies-launches-uk-technology-centre/