Laying of the Nord Steam natural gas pipeline is now underway in the waters of all five countries through which it will pass. This milestone was passed on 19 October, when the section of pipeline being laid by the Castoro Sei pipelay vessel reached Danish waters, approximately 50 km south of Bornholm. Castoro Sei had picked up the pipeline in German waters where the flat-bottomed Castoro Dieci had completed ahead of schedule the difficult shallow-water section at and near the German landfall.

In the meantime at the other end of the 1224 km pipeline route the world’s largest pipelay vessel, the 300 m long Solitaire, has just reached the Finnish Exclusive Economic Zone (EEZ) having completed a key section in Russian waters. It had picked up the pipeline where Castoro Sei had completed the section at the Russian landfall.

Castoro Sei had started laying the Nord Stream Pipeline in April 2010 in the Swedish EEZ off Gotland, laying pipe in an easterly direction into Finnish waters before laying down the pipeline and moving on to Russia.

Nord Stream has now completed over 500 km of the 1224 km natural gas pipeline through the Baltic Sea and is on schedule to start transporting gas from Russia to customers in the European Union in late 2011.

The E7.4 billion Nord Stream Pipeline, which is privately financed, is the most advanced of the major new gas infrastructure projects, which the European Union will need to meet its energy and climate protection needs over the coming decades.

Read the article online at: https://www.worldpipelines.com/business-news/27102010/nord_stream_now_in_the_waters_of_five_countries/ 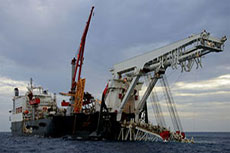 Construction of the Nord Stream pipeline is proceeding on schedule. Solitaire will lay the majority of the first pipeline in the Gulf of Finland.