"We need more natural gas in Germany – as a partner for renewables", sums up the outcomes of a survey carried out by the independent forsa market research institute in May 2018 on behalf of Wintershall. This reveals that the majority of Germans doubt that the planned energy transition in Germany – the so-called Energiewende – is running smoothly. 62% of those polled fear bottlenecks and outages. Only about a third do not expect any complications. In a forsa survey conducted two years ago, confidence in the success of the energy transition was considerably higher. 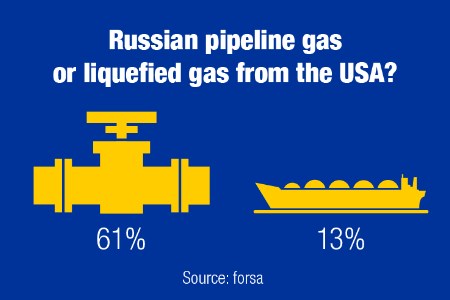 The critical views of the Germans are confirmed by the 2017 Climate Protection Report, which was published by the German Federal Government this month. This states that Germany will clearly miss its climate targets for 2020. "This is exactly what experts have warned about for years," said Wintershall Executive Board Member Thilo Wieland this week in front of international journalists at the World Gas Conference in Washington D.C. "This has long been on the cards. This would not have happened with natural gas! And the people in Germany see that in all clarity, as the current representative survey shows."

For example, the study reveals a clear response to the question as to the best partner technologies for renewables to ensure that energy supplies remain secure and affordable. The majority of Germans (54%) believe that natural gas is the best partner for renewables. As the cleanest fossil fuel, natural gas therefore lies well ahead of timber (22%), oil (20%), nuclear (17%) and coal (14%). Only less than one in ten believe that renewable energies do not need supplements.

The Germans' positive view on natural gas is also reflected in their assessment on the development of the natural gas market. Three quarters of Germans are convinced that Germany will need more or, at the very least, equally large amounts of natural gas in the future. However, the high demand for natural gas is coming at a time of declining domestic production in Germany and the EU. In 2030, for example, the EU will have to import more than 400 billion m3.

Where should the natural gas come from that Germany and Europe need? The Germans consider Norway (71%), Canada (52%) and Russia (49%) to be the most reliable energy partners. Only about one in five (21%) consider the US to be a reliable energy supplier. Here the value has declined significantly since summer 2015: Only three years approximately about 40% still considered the US to be a good energy partner.

"The declining trust in the US is certainly also due to political reasons – here the publicly discernible differences of the past few months have left their marks," explains Wintershall Board Member Thilo Wieland, who adds: "Of course there can be occasional tiffs between friends and allies. But fair market conditions and mutual trust are the prerequisites for global trade in order to create prosperity and growth. With Norway and Russia, Europeans have two important and proven energy partners. But it would be good for everyone if the relations with the US were back on track."

The currently considerable scepticism towards the US as an energy partner is also revealed in another question surveyed by forsa. Asked directly whether Germany and Europe should meet their natural gas needs from Russia or the US, 61% of Germans prefer pipeline gas from Russia and only 13% prefer liquefied natural gas from the US.

Information about the survey

The nationwide survey was conducted between 7 and 9 May 2018 by the forsa opinion research institute. 1001 citizens aged 18 and over were selected in the Federal Republic of Germany by means of random sampling.

Read the article online at: https://www.worldpipelines.com/business-news/27062018/survey-investigates-germanys-preferred-energy-partners/