According to Reuters, Natural Gas Europe and Oil Voice, a consortium, consisting of Snam (an Italian gas grid company) and Allianz, has won its bid to buy a 49% stake in Gas Connect Austria, a pipeline company.

The consortium was selected as purchaser by OMV after a competitive auction process that started in 2Q16.

According to Snam, the accepted bid will see Snam and Allianz pay a total of €601 million (US$675 million) to buy the stake from its current owner, OMV (Austria's leading oil and gas group). The price includes which €147 million for pro-rata reimbursement of an existing shareholder loan by entering into a new shareholder loan with GCA at the time of closing.

OMV will retain a controlling 51% stake in Gas Connect Austria.

During the signing, held on 22 September, OMV’s CEO Rainer Seele, said: “With the sale of the minority stake of 49% in Gas Connect Austria, we have increased OMV's financial strength. OMV retains control of Gas Connect Austria with 51%, so that this key infrastructure remains in Austrian hands.”

Read the article online at: https://www.worldpipelines.com/business-news/26092016/omv-sells-49-percent-stake-in-gas-connect-austria/ 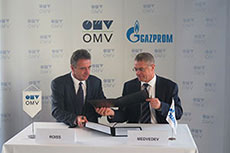