Pembina Pipeline Corporation provided an update on projects in several of the Company's business units.

Pembina is pleased to announce that it has commenced commissioning and extracted its first natural gas liquids  barrels through its recently constructed 200 million ft3/d Resthaven gas processing facility. Commissioning will continue over the next two to three weeks at which point Resthaven will deliver NGLs into Pembina's Peace Pipeline.

Pembina continues to make excellent progress on the construction of Musreau II, a 100 million ft3/d shallow cut gas plant and now expects Musreau II to be in service in December 2014, ahead of its previously anticipated in service date of first quarter 2015.

"We are excited with the progress we have made on these two projects and believe they demonstrate Pembina's ability to execute on its capital program," said Stu Taylor, Senior Vice President NGL & Natural Gas Facilities. "When Musreau II comes onstream Pembina will reach an important milestone of having 1 billion ft3/d of field gas processing, making Pembina one of the largest gas processing companies in the Western Canadian Sedimentary Basin."

In connection with the Company's Phase III pipeline expansion, Pembina was also successful in its recontracting efforts to secure the majority of existing crude and condensate volumes under long-term, firm service contracts. Since our last press release dated 10th September, 2014 Pembina has contracted an additional 18 000 bpd as part of its Phase III pipeline expansion and now has 307 000 bpd under contract. In aggregate Pembina has now contracted approximately 650 000 bpd of crude oil, condensate and NGLs through its recontracting efforts, and its Phase I, II and III conventional pipeline expansions.

Pembina was informed by Statoil that Statoil's Cornerstone oil sands project has been deferred. The engineering support agreement between Pembina and Statoil for the related Cornerstone oil sands pipeline expires at the end of September and no additional capital will be spent on the pipeline project. Pembina will retain the right to use the engineering for other commercial discussions.

"While we are disappointed about the Cornerstone pipeline not proceeding at this time we have approximately US$ 6 billion of committed projects underway and another US$ 1.7 billion of projects we are looking to commercially secure," said Mick Dilger, President and Chief Executive Officer. "We believe this suite of projects will continue to drive shareholder value in the years to come."


Adapted from press release by by Hannah Priestley-Eaton

Read the article online at: https://www.worldpipelines.com/business-news/26092014/pembina_provides_project_updates/ 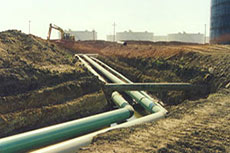 Pembina Pipeline Company to proceed with US$ 2 billion pipeline expansion.