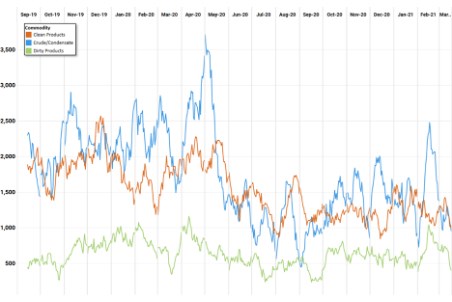 The research note from Kpler reads as follows:

Overnight on Tuesday 23 March, the container Ship Ever Given ran aground in a southern part of the Suez Canal, a rare event in the history of the waterway.

The potential for a rapid build-up of liquid and gas tankers in the region is marked with multiple laden vessels now indicating delays for Suez transit. As of Wednesday 24 March (morning) there were seven vessels carrying crude, 15 carrying refined products, five LNG vessels and two LPG carriers either sat waiting or approaching the canal. While attempts to clear the ship from the canal continue, this queue will continue to build. A salvage squad from the Netherlands will attempt to dislodge the ship beginning Thursday 25 March.

The LNG market faced constraints around the Panama Canal through winter amidst a spike in East Asian demand. Cargo re-routes were necessary. There is distinctly less optionality for shippers this time around.

The LNG market has already had a taste this winter of what can happen when logistical pinch points are tested to the maximum. East Asia pulled significant quantities of last minute cargoes into the region, straining the limits of the Panama Canal and forcing shippers to seek alternative routes. The options for shippers in the immediate aftermath of the incident in the Suez Canal are far more limited. As delays continue, shippers will have to broach the unpalatable decision of whether to make a u-turn and head for the Cape of Good Hope or wait it out in the Red Sea and Mediterranean. Given the considerable increase in voyage duration, it is unlikely that anyone already in-situ will divert (Suez to Amsterdam at 12 knots is just over 13 days via the canal or 41 days via the Cape). This could cause shippers not already committed to reassess their options, but there would still need to be notice of longer running delays before those decisions were made (it takes just under 24 days via the canal from Ras Tanura to Amsterdam vs 39 days via the Cape). The event highlights the relative fragility of the on-water trading system, particularly for those flows for which Suez Canal transits make up a higher percentage of total volumes moved.

Daily traffic of all liquids tankers through the canal, both laden/ballast and north/southbound, ranges between lows averaging eight per day in January 2018, up to a high of 15.3 per day in May 2020.

Since a recent low of 9.7 transits per day in July 2020, the number of tankers moving though the Suez has increased steadily, reaching 12.3 per day up to yesterday, before the blockage of the canal. Over the last couple of years, 80% of these transits have been for laden vessels.

Prior to the spike in LNG moving to Asia from the US this winter, the number of LNG vessels transiting the canal in any direction and laden/ballast was 1.8 vessels per day (55% laden on average), a much more even distribution than for liquids. Following the increase in LNG cargoes being pulled into Asia from the Atlantic Basin this winter, transits through the canal hit a new high in January 2021 of 3.4 vessels per day, 2.1 of which were laden (62%). This has since settled back down to 2.6 per day in total and 1.2 per day laden so far in March.

Considering the current level of liquids tankers and LNG carriers transiting the canal compared to previous highs, there is scope to increase movements once the canal has been cleared. At that point the pressure from the rest of the shipping fleet to clear the backlog will need to be taken into account.

Of the 39.2 million bpd of crude imported by seaborne methods in 2020, just 1.74 million bpd transited via the Suez Canal. At 4.4% of total flows, the global crude market would appear to be able to cope with any short-term delays.

Despite relatively limited crude flows through the Canal, the closure puts pressure on regional markets. In 2020 Europe imported 550 000 bpd of crude from East of Suez sources of which 520 000 bpd transited through the canal. This is less than half the volume that transited the canal in 2017 (1.19 million bpd). In addition to these volumes are flows ported through the SUMED pipeline system as partial discharges from VLCCs in the Red Sea to then be reloaded in the Mediterranean. Whilst the route is highly important for flows of crude into Europe from the Middle East, as a share of total crude imports, it only represented 5.6% of total arrivals in 2020. Even if considering that 2020 was an abnormal year for crude demand, flows via the Suez Canal accounted for just 7.2% of imports in 2019.

Unlike the East to West flow, the volume of crude headed from West of Suez markets to the East has become more significant over time, with cargoes from the North Sea and Russia often providing the marginal barrel to the East. Imports into South and East Asia via the Suez Canal hit a high of 1.27 million bpd in June 2020, albeit arrivals later bottomed out at just 310 000 bpd in November of the same year. Flows from Europe (including Russia) were the primary cause of such a large swing, although a drop in flows from North Africa during the worst of the pandemic driven demand crash contributed. Flows via the Suez have since rebounded, although remain below 1 million bpd on average through the last quarter.

Refined product markets are far more susceptible to issues in the canal given the higher volume of traffic as a total percentage of flows east and west.

European LNG imports are more reliant on flows through the Suez Canal. Prior to the summer 2020 downtown, the previous couple of years had seen imports arriving via the Suez averaging 25 cargoes per month (19.4% of total). This compares to 104 per month via other routes. Since mid-2018 the growth of exports from Russia and the US have reduced the dependence on imports from Qatar considerably. Whilst this helps with long-term diversity of supply, it cannot address the problem of short term blockages in the canal, with demand centres needing cargoes in the very short-term. Fortunately this event has happened coming into the shoulder season when demand is typically lower following the winter peak. Imports at this point should allow for larger storage injections from piped gas. That said, natural gas storage levels are coming out of the winter at low levels after the region stepped away from purchasing expensive LNG cargoes through December and January as demand for gas was far greater in East Asia.

Finally, there are currently two VLGC LPG carries sat idling in the Great Bitter lake waiting to transit southbound. The only other LPG vessels in the vicinity are carrying out regional supply operations in the Red Sea.

Read the article online at: https://www.worldpipelines.com/business-news/25032021/suez-canal-delaying-more-than-20-liquidgas-tankers/

2022 will be a banner year for the flowmeter markets, suggests Jesse Yoder, PhD, Flow Research, USA.