Underlying EBITDA profitability was US$29.3 million, a 42% increase on prior year. EBITDA margin continued to improve through strong cost and operating synergies.

The board has approved the payment of a fully franked dividend of AU$3.65 cents for share. This equates to approximately 40% of underlying NPATA for the 6 months ended December 31, 2015.

2015 was an exceptional year in terms of M&A activity, with the signing of six acquisitions all funded predominantly by debt and accretive immediately. Each acquisition has added important capabilities, infrastructure, customers and reputation that will contribute to a stronger competitive position and sustainable revenue growth over the next few years. SpeedCast has invested in new frontiers (Africa and South America) and has strengthened its position in two key growth industries for the Group (Maritime, Energy).

In 2015, SpeedCast built the foundation of its Energy business, significantly enhancing its capabilities with the establishment of a Houston-based team and the acquisition of Hermes Datacomms, thus paving the way for additional market share gain in 2016. Revenue grew 251% in 2015 year over year.

During the year the Group continued to invest in key support functions important for successful integration (HR, IT, Finance) and in the building of the Energy team in Houston.

Significant cost synergies have already been achieved as part of the integration process.

“FY15 was an exciting year for SpeedCast. We delivered strong growth in our performance metrics, despite headwinds in some industries we are serving”, commented Pierre-Jean Beylier, Chief Executive Officer of SpeedCast. “Our growth strategy of combining organic growth and acquisitive growth continues to generate significant shareholder value. SpeedCast is well positioned to capture growth opportunities in its key markets and I am looking forward to another exciting year in 2016”, Mr. Beylier added.
Edited from source by Elizabeth Corner

Read the article online at: https://www.worldpipelines.com/business-news/25022016/speedcast-international-limited-full-year-2015-results/ 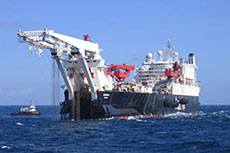 SpeedCast selected by Allseas to deliver satellite services for their flagship vessel.