J. Murphy and Son’s Head of Business Development, Andrew Ball, has been elected as the 52nd President of the International Pipe Line & Offshore Contractors Association (IPLOCA). 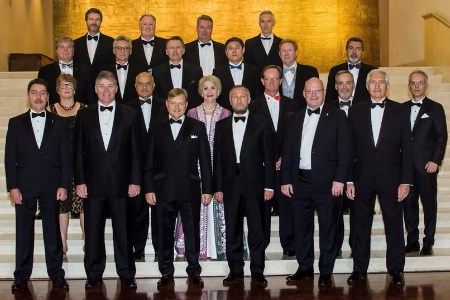 The Presidential inauguration ceremony was held at the IPLOCA’s annual convention in Mexico City. In Ball’s first presidential address at the AGM he announced the theme for his year in office would be making sure IPLOCA is “fit for the future” and remains the “association of choice”. In support of this theme, he also confirmed some of the key initiatives being launched in his presidential year.

Ball said: “I’m thrilled to take on the presidency; it is such a huge honour. I’m really looking forward to my year in office and presenting the IPLOCA annual safety awards in London in 2018 at our 53rd annual convention. This year I want to focus on improving our membership engagement and making sure people really feel the value of our association. I’ll be doing this by reviewing our sub-committees, launching a membership survey and improving communications alongside the publication of a rolling five year business plan.”

The presidency will see Andrew representing pipeline and offshore contractors worldwide on behalf of IPLOCA.

Steve Hollingshead, Murphy’s Chief Executive, said: “It’s fantastic that Andrew has taken on the role of president this year for IPLOCA. He has the full support of everyone at Murphy and we know he will do a wonderful job. We’re committed to delivering world-class infrastructure in the marine and pipeline sectors across the world and believe Andrew’s presidency marks an exciting time for us to learn more about projects across the world.”

Read the article online at: https://www.worldpipelines.com/business-news/24112017/new-iploca-president-appointed/