TAP and its contractors will soon complete the rehabilitation of the 12.5 km road connecting the Vithkuq village with the national road Korça-Erseka. As per its commitment, TAP ensures the complete rehabilitation of used roads, in this case, the Floq-Vithkuq segment. 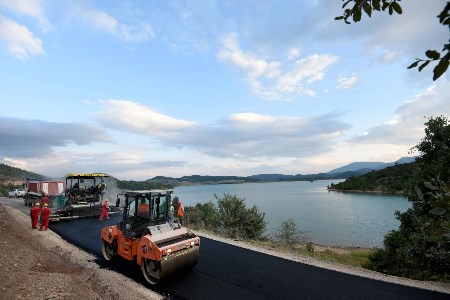 Substantive works have been carried out on this road, including a new sub base, culverts and drains. Also, this road segment has been widened in certain parts and the entire length will be asphalted. The road is being rehabilitated in the framework of TAP’s rehabilitation of access roads and bridges used for transporting materials for the pipeline construction.

The second phase of rehabilitating access roads, which comprises about 120 km of road, is carried out by AlbStar, a local contractor of TAP’s contractor, Spiecapag. By the end of June 2018, more than 80% of the works for the second phase had been completed.

TAP crosses challenging terrain in Albania’s mountainous area, with the pipeline’s highest elevation point at 2100 m. Heavy machinery and equipment, including a 60 t pipe-bending machine and over 1000 18 m pipes weighing up to 16 t need to gain safe access to these remote areas. That is why TAP has built and reinforced several pieces of vital infrastructure along its route. Therefore, all TAP improvements of road infrastructure in Albania have been carried out to enable the safe transportation of pipes and heavy machinery for the project.

Read the article online at: https://www.worldpipelines.com/business-news/24072018/tap-rehabilitates-another-road-in-albania/